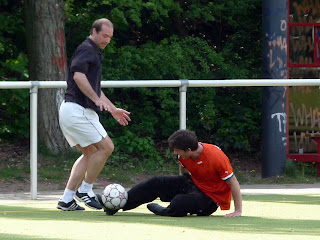 Today was a bad day for Theresas Mütter. I suppose things went wrong right from the kick-off, at the ungodly hour of 10 am. On a Saturday! Do they not know people have parties to go to in Berlin on Friday nights?!
We were to play against Lokomotiv Hallelujah who had all their players on the pitch, ready and waiting at the predetermined time. I arrived at 9.55 only to find we were nine, including me. Injuries and, presumably, the early start taking their toll. Never mind, we kicked off in any case, determined to beat the odds. Once Britta took to the pitch we had five girls, or Mädels as they're called here, making up half our contingent which included emergency draftees. No subs, and still we weren't 11.
"Hallelujah" thought the lads of Lokomotiv, not a Mädel among them. The greedy bastards wouldn't let us play with the ball and proceeded to pass it around amongst themselves before the inevitable bombardment of our goal. After 30 minutes we did manage to get the ball into their half, but it was promptly returned before they passed the ball around a bit and scored another goal. Six they got altogether before half time mercifully came. 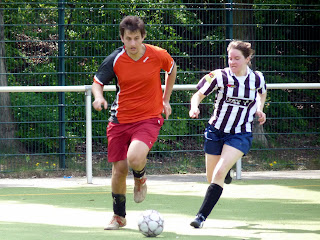 There wasn't much we could do or change for the second half but we said we'd give it a lash anyway. I scored a goal! Unfortunately it was at the wrong end, with the ball ricocheting cruelly off my legs into the net for my first own goal. They chalked up a few more goals as they continued to run rings around us. But still we tried.
Then we got a chance! The ball landed at my feet and I turned and ran with it towards goal, Lokomotiv players all around me. I managed to skip an illegal challenge and keep going. Somehow I threaded the ball through to Christoph who played a lovely one two and I found myself in the penalty area, some fella hanging out of me as he tried bundle me off the ball. I shot at goal. The goalkeeper saved. The fucker. You'd think he would have let it in out of pity, but no, that's not the German way. 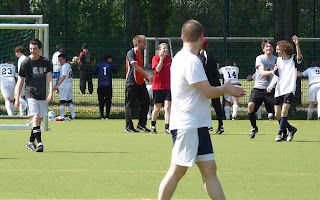 Later we had another chance when the ball rolled across the face of the empty goal, but our forwards' legs unfortunately weren't fast enough to get there on time. There were to be no more chances and the Hallelujah boys lashed in another few goals before the referee put us out of misery. I think it was 16 goals by the end of the game, but sure who's counting anyway? Isn't it the taking part that's important?
That famous victory in November seems like a long way away now but at least we tried. Oh God how we tried... 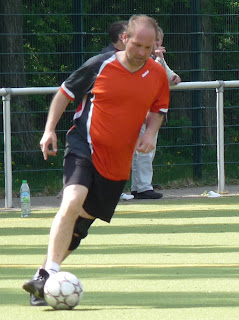 PS - The pictures featured here are from another game, played under happier circumstances when we played amongst ourselves. The full selection from this day are available here: http://picasaweb.google.com/faheyc/TheresasMutter#