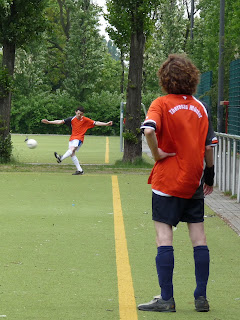 Honour was restored to the ranks of Thesesas Mütter today. But not without heartbreak.
It looked so good for so long. A 3-1 lead at halftime! That after playing out of our skins, giving our all, fighting like fuck. "Mein Kampf" Adolf once wrote. He didn't know the meaning of the word. 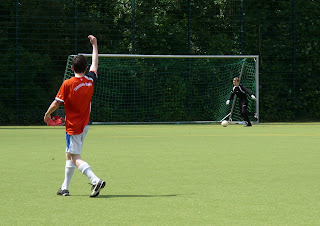 Nils said he wanted blood. He got blood sweat and tears.
With a two goal advantage, we were confident we could maintain our tremendous fighting spirit and courage and do something special. We dared not speak of a win, though such giddy thoughts entered all of our heads. We were on the verge, the verge of something incredible.

The second half began as the first; us harrying, pressing, hounding our opponents for the ball. Then I crossed the ball out to Holger on the right and ran like fuck towards goal. He floated in a lovely cross and I got in ahead of the defender. My outstreched leg got to the ball, sending it past the despairing arms of the goalkeeper. A goal! 4-1.
We dared believe. Could this be possible? We had these fuckers on the rocks. They knew they were bet.
A soft goal changed things however. Gave them hope. We had given everything to that point and the effort was taking its toll. Legs complained, lungs strained, muscles pained. With five minutes to go it was 4-4. Then Disaster. Dis-fucking-aster. They edged in front. 4-5. Sickener.
Komm, los. We need another goal. We can't let these pricks win. Komm Leute! Come people! I ran and ran, but my legs complained. What the fuck are you doing to us? they asked. Shut up legs. Run, damn you! Run! I nearly puked. My mouth frothed, my eyes watered, throat coughed. Every muscle moaned. But we can't let these fuckers win! 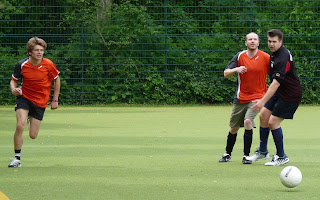 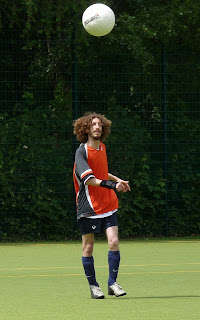 Cramp said otherwise however and the final whistle sentenced us to a defeat we didn't deserve. Defeat from the jaws of victory.
My heart is low, my heart is so low. as only a Mütters heart can be.
But we fought all the way. Against the odds. The final scoreboard might say otherwise, but the little team won today. A victory for the poor. Mother Theresa will be proud.