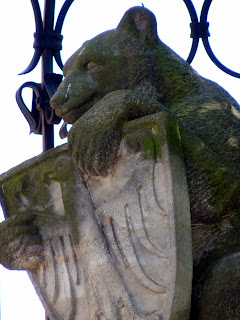 Today was an important day for me as a recently-arrived immigrant. I registered! Only 437 days late. "Besser spät als nie," as I've been saying quite a lot since I got here.
I thought it was about time I finally got all my affairs in order, so off I went again to the local Bürgeramt. The queues reminded me why I'd been avoiding it in the first place. Nothing to do with fast food, Bürger are people apparently, so I had to queue with the other Bürgers and wait my turn. I've still no idea what an Amt is. A selfish ant perhaps.
God I hate waiting. It's not helped when the place is stuffed with screaming babies. The place was jammed! The stench of stale sweat was overpowering. The yabbering, the screeches, the shouts. It started me thinking crazy things. Bürgers queueing after the pub in Henry & Rose (chippers) waiting for drunken idiots and chips. It occurred to me if I was in Hamburg I'd be a Hamburger Bürger. Or in Frankfurt, a Frankfurter Bürger. And so on.
After running out of amusing Bürger combinations I contemplated the ramifications of my registering. Did it make me German? Do I want to be German? "No way!" I told myself. What kind of man would I be, throwing away my heritage, blood and roots willy nilly? (Never my willy.)
And German?! I'm happy to call myself a Berliner but I could never call myself German. I couldn't be associated with those Lederhosen-wearing fuckbags in Bayern or anywhere in the south, or indeed with the West Germans either. Damn Wessies.
Berlin is not Germany I decided. That calmed me down a bit by the time they eventually called my number. I was never so happy to see 326 flashing on a screen before. 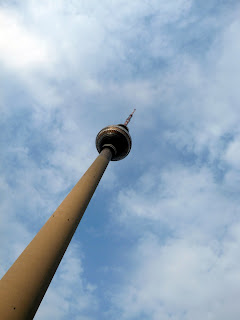 "Dreihundert sechs und zwanzig?" she queried as I went to sit down. "Ja," I replied. "Ich wollte mich anmelden."
She held her hand out, but not in a manner that encouraged a handshake. Palm upwards. She looked at me expectantly. Was she looking for a bribe? After leaving me wait for three hours?!
"Der Zettel bitte!" she barked. Jeeesus. She wanted the docket with the number on it. Good thing I hadn't thrown it away. Or eaten it. I handed it over along with the other forms and my passport and she tapped away at her computer.
Ten small-talk-free minutes later it was done. I was registered! No longer an illegal alien or whatever I had been up to then. She handed me a copy of the form and that was that.
To be honest I was a little disappointed. I thought a few balloons might have come from the ceiling. Crackers and streamers going off. Maybe some trumpets. Maybe she'd pull out a bottle of Sekt (sparkling wine) from under her desk, pop the cork and a troupe of dancing girls would come out of nowhere kicking their legs high in the air... But no. 'Twasn't to be. Ah well!

Meanwhile, I thought the legal crap was all behind me after settling with the Audi guy on Tuesday but the Polizei have other ideas apparently. I've to pay a €35 fine to the Polizeipräsident according to an official-looking letter which arrived yesterday. I've genuinely no idea why. (It's not because I wasn't registered.)
The alleged offence(s) were outlined by a series of numbers designed to stop even native-speakers from understanding the supposed crimes. I presume that's the Polizeipräsident's real game: how can you defend something when you don't know what you're accused of? The fucker. Probably a Wessie. Kaká I say to him. I've been saying Kaká a lot since yesterday in fact. Suddenly €35 doesn't seem like so much money anymore.
Labels: Berlin bureaucracy Bürgeramt Law police