Germans are generally not known for their subtlety. They say what they think, often at the expense of diplomacy and people's feelings. Sometimes however, this sledgehammer approach is to be admired, such as last week when all 532 suggestions for a memorial to commemorate the reunification of the country were dismissed as complete crap.

The following article, which I wrote after seeing how bad the actual applications were, tells the rest of the story: 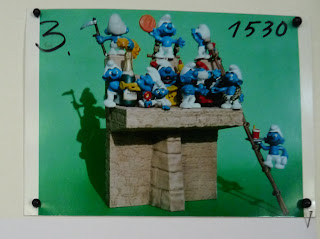 The quest to build a monument in Berlin suitable for commemorating 20 years of German reunification has failed spectacularly with the jury deriding the competition’s 532 entries as “complete crap”.
The memorial was supposed to celebrate the unity and freedom of the new Germany, 20 years after the fall of the Berlin Wall in November 1989, but the project has now been thrown into doubt following the jury’s complete rejection of all submissions.
Entries came from artists and architects all over the world, including one from a firm in Dublin, and were accepted on the basis they celebrated the symbolic unity between East and West Germany following the “Peaceful Revolution” of late 1989 which eventually led to reunification.
A 19-man independent jury was given the task of reviewing all entries, and 20 were due to be selected for final consideration before an overall winner was picked.
The jury, made of respected political figures and artists, found none of the submissions good enough even for final submission however, and the 532 entries were lambasted as “kompletten Schrott” (complete crap). Individual jury members expressed the opinion the pieces were “disastrous” and “naïve”. 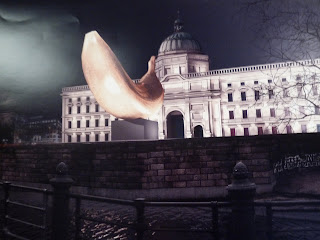 Their frank assessment of the competition’s entries leaves the process in limbo, and it is now unclear whether a memorial will be built as planned near the site of the former Palast der Republik, the former seat of East German government in Berlin.
One of the submissions made for the “Unity and Freedom Memorial” was a giant banana. Bananas featured prominently in many West German jokes about their socialist cousins due to the rarity of such exotic fruit in the former GDR.
Berliners can now assess for themselves the quality of all the submissions, after they were put on show at an exhibition at the Kronprinzenpalais in the city until May 31st. Nobody would be expected to pay to look at “complete crap” however, so entrance is free.

In fairness, the exhibition is absolutely hilarious for anyone up for a laugh. Apart from the giant banana, other laughable submissions included a huge giraffe (what with the giraffe being a potent German symbol); a UFO (evidently spacer architects); and a 3-D version of the word Zweifel for some reason. Zweifel means doubt. Incidentally, one would have no idea what that was supposed to be as the word could only be made out from above. Presumably the artists were in cahoots with the crowd who suggested the UFO. 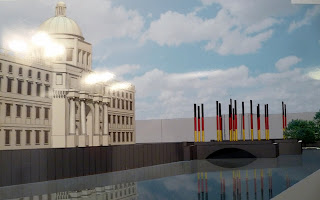 The clowns from Dublin simply suggested a load of poles painted in the German colours. Jesus lads, make some sort of effort would you!
Most of the applications actually had fancy graphics and so on. Others didn't even bother. One girl just wrote a load of shit on A4 pages and stuck them all together. My favourite came from Wolfgang Strack in Hamburg. He just got a load of Smurfs, stuck them on a pedestal, took a picture and sent it in! There was no note or explanation on what it had to do with German unity of freedom. Brilliant!
On the way out of the exhibition is a visitors book. Even that's hilarious. Two lads were pissing themselves going through it. "This is even better than the exhibition," said one. 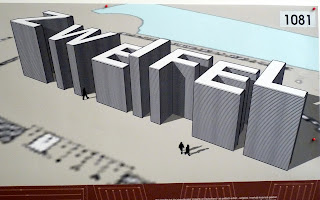 It struck me Germany is the only country in the world where each and every submission to a serious competition, by so-called serious artists and architects, could be dismissed as complete shite. Nowhere else would they be so honest. Look at the Spike in Dublin for example. A frickin' needle, sticking up pointlessly into the sky! Built at a cost of millions. What clown thought that was good? No German jury would ever have given it the go ahead - that's for sure.
Mehr Bilder sind hier.
Labels: art Berlin