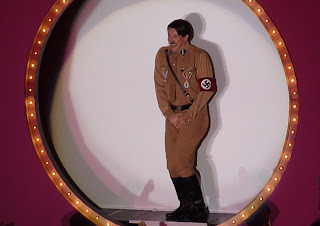 Hitler had Berlin in stitches on Friday night, earning rapturous applause, shrieks of laughter and howls of approval. Yes it's been a while since the mad fella was so popular here, but he received standing ovations from the crowd after the German premiere of Mel Brooks' hit musical The Producers at Admiralspalast.
I'd no idea Adolf was so talented, but boy that man can sing and dance! Jesus he was great! His Nazi buddies were great too, singing and tap-dancing their fascist hearts out for the Vaterland. Maybe if they had stuck to that instead of trying to take over the world, we could have avoided all that unpleasantness and carry on with the war. 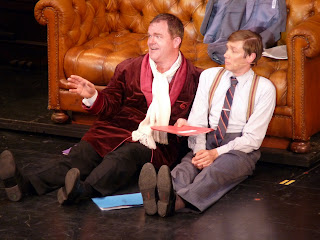 Of course, Frühling für Hitler, "a new neo Nazi musical", was only a small part of the overall show, but it was interesting to see the reaction of the crowd to an unpolitically correct farcical comedy which takes the piss out of stereotypical Germanness and the Nazis. I thought there might have been a few stony silences, maybe a sharp intake of breath at the sight of a swastika, or an indignant stomp out of the theatre. Not at all. The crowd loved it! 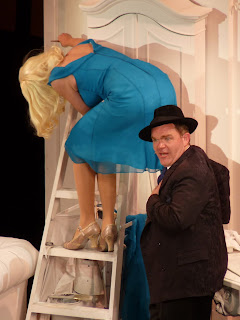 It helped of course that the musical itself was completely ridiculous and absolutely hilarious. Even in German! It probably helped too that it took the pee-pee out of southern Germany, with the main Nazi-supporter character being a Lederhosen-wearing oaf from Bavaria.
They don't like Bavarians in this town. Particularly those from Munich, München as it's called here. The inhabitants are called Müncheners, or Münchkins if they're little. Anyway, Berliners don't care much for Müncheners. With good reason too - they're shite. 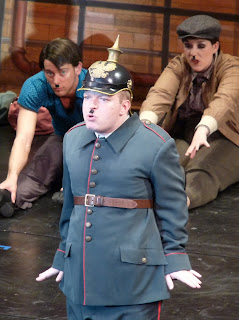 Berliners, on the other hand, evidently have a very healthy sense of humour, and they lapped up every minute of The Producers. The singing was fantastic, the dancing faultless, production smooth as newborn peach. Those who asked if it's time to laugh at Hitler got a definitive answer. Jawohl!
Labels: Bavaria Berlin Munich