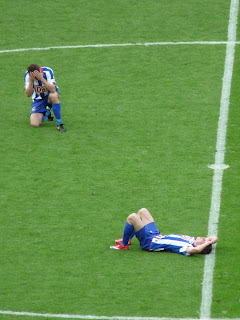 Hertha blew it on Saturday. 75,000 fans crammed into the Olympiastadion to see them beat Schalke 04 and maintain the challenge for a glorious Bundesliga title, the first they would have won since 1931. Instead however, they played their part in a borefest which only served to show what undeserving winners they would have been.
Locals and the media had been getting their knickers in a twist about the possibility of "Die Alte Dame" winning an unlikely title, "Berlin macht sich Blau," or words to that effect on the cover of one of the tabloids, but sadly for the capital's Fußball fans it seemed the team didn't really want it as much as they did.
The match ended as it began. 0-0. An anti-climax of an event if ever there was one. The disheartened players lined up in the middle of the pitch with a banner afterwards. "Danke für 17 mal Gänsehaut." Thanks for 17 times goosebumps. This wasn't one of them. It was as if the players were seeking to atone for their ineptness by undergoing a further humiliation. 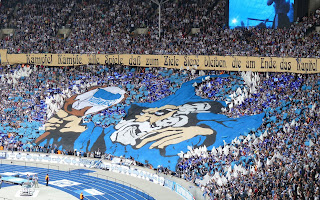 In fairness, the fans deserved thanks. They sang and cheered all the way through, right to the bitter end, despite the lack of anything worth cheering. Due to the absence of entertainment on the pitch, I suppose they had to make their own. They reminded me of Waterford fans, the same colours, the same enthusiasm, the same disappointment at the end. One of the Hertha fans had a blue Union Jack however - you'd never see a Waterford fan with that.
The club itself had also done all it could to encourage the players. A giant Hertha wizard was unfurled over the eastern end, while mascot "Herthino", (a lion, bear or something,) and the stadium announcer did their best to cajole the fans into making more noise.
The supporters are a marked contrast to Real Madrid fans at the Bernabéu who generally just sit there and demand to be entertained. It's like 80,000 squirrels watching a match, all chewing pistachios and sunflower seeds and discarding the shells. These form little shell mountains which can be seen under seats after a game. Only the visit of Barcelona gets them truly excited but the less said about that the better... 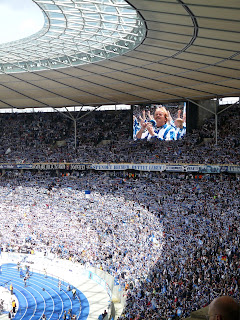 What really took me to the Olympiastadion was the beer and brötchens. Eoghan's tall tales of beer on tap for journalists meant I had to go back to see for myself. "Definitely have an empty stomach going to the match..." he told me. 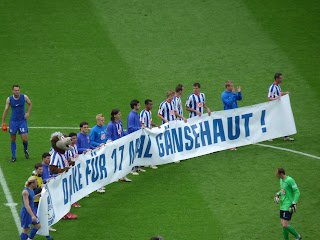 It seems every journalist in Germany had the same idea however. They actually ran out of beer! Luckily I had helped myself to two at a time. I would have been very disappointed otherwise. Eoghan wasn't lying about the brötchens either. Little bread rolls with cheese, gherkins, tomato, cucumber, onion, ham, salami etc. They also had fresh fruit and a sort of stew or soup with sausages in it. It was a fine spread! Pity the players couldn't live up to it.
Labels: Berlin Fußball