Tomorrow is Herrentag, (Men's Day), when women all over Berlin will hide behind their curtains, quivering with apprehension, afraid to step outside, waiting for normality to restore itself again.
You see, Herrentag, known as Männertag if you're a Wessie, is when middle-aged German men drink with the sole intention of getting pissed completely out of their minds, rendering the streets outside unsafe for members of the fairer sex. They gather together in groups in the morning, beer bellies poking out from stretched t-shirts, flowers in the handlebars of their bicycles. They carry their booze in little wooden carts or trailers which they then wheel around for the rest of the day.
It can get quite messy; participants generally start drinking very early in the morning to get pissed as soon as possible, so by 10 a.m. they can be found swaying dangerously by the side of the road, beer stains, snot and puke on their shirts, crawling on their hands and knees, perhaps even barking obscenities at "sobers" as they pass.
"They're fucking eejits," Dáire warned me. "You get them every year. Gobshites getting as drunk as possible, falling around, and then falling asleep by the side of the road."
It's the busiest day of the year for ambulances here. Why they do it nobody knows. Tomorrow is actually a holiday: Himmelfahrt, (literally "sky-journey"), the day Jesus is supposed to have gone to heaven. Maybe the men are trying to join him. 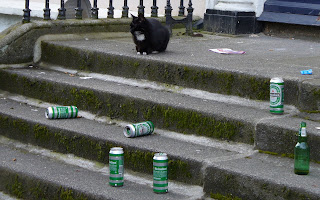 Himmelfahrt originally coincided with Vaterstag (Father's Day), a day when the whole family used to gather around, celebrate family life, have a barbeque and eat Kuchen together, as Germans seem to do with any half excuse or at any available opportunity. Single men or men who weren't fathers complained however, resulting in it being called Herrentag instead, so it could be a day for all men. Like Good Friday in Ireland, it's evidently the perfect excuse to get pissed.
I got my crate of Radeberger yesterday, and my bicycle is ready and willing. Noddy arrives in the morning so the timing couldn't be better, although as Jenny pointed out, everyday is Herrentag when Noddy's around...
Labels: Berlin Noddy