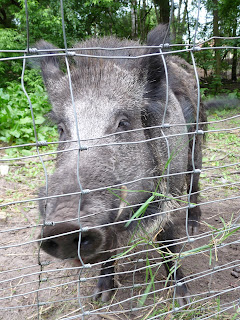 I was beginning to doubt if wild boars existed at all. Fourteen months I've lived here without seeing one, despite the fact Berlin and the surrounding countryside is meant to be stuffed with them. Even before I moved here, I had read they needed to cull the poor feckers because they were playing havoc with traffic, running out in front of cars and generally making a nuisance of themselves.
I was told they were even to be seen from the S-Bahn on the way out to Birkenwerder, hanging out in groups and snuffling around by the side of the tracks, much like Irish teenagers.
Anyone I talked to told me they had seen them. Not just one or two either. Heaps of them. Not one Wildschwein did I see however. I was beginning to think it was just a myth, an eleborate hoax, that people were having a laugh at my expense.
Then, last Friday, I finally saw one! My first Wildschwein! Although he wasn't very wild. He was penned up in an enclosure and he came running over towards us when he saw us approaching. Very friendly he was too, so we fed him grass and roots and shit through the fence, leading me to discover he had a wet nose. Pig snot I suppose. He chomped up everything we gave him, wagging his tail with contentment.
So my first encounter with a wild boar proves they do exist. At least in captivity. Although that raises more questions. One has to ask if a tame wild boar is a wild boar at all. Surely that just disproves their own existence. Dammit, I don't know what to believe anymore... 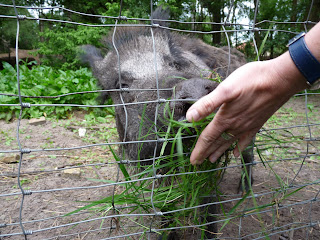 My theology-studying flatmate was very put out when I told her I doubted the existence of wild boar because I hadn't seen one.
"So you can't believe in something unless you see it?" she retorted.
"Yes," I replied, much to her disgust.
I wonder if she'd appreciate the irony of her inadvertently comparing God to a Wildschwein.
Labels: Berlin boars humour Life