BellX1 do the Bang Bang 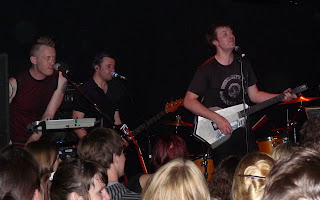 BellX1 played in Berlin again last night, again at the wonderfully-named Bang Bang Club. Twice in the space of a year I've been to see them there, making it a reasonably easy task to calculate inflation in the German capital.
Last October it was €10 to see the lads from Kildare play, but last night the price climbed outrageously to €13. Three Euro! A third more than before! In six months. I guess that makes the rate of inflation a staggering 66.6% per year in Berlin. So much for falling prices in these hard times.
Thankfully I didn't have to pay. (One of the perks of being a journalist. I mightn't earn any money, but I can go to things for free.) The gig itself was great, thanks to the venue and the band's will to entertain. The Bang Bang Club is tiny, about the size of a large stamp. I stood as far away as I could from the band but could still tell Paul Noonan had onions for dinner.
Bellx1 were once famously introduced by Pat Kenny as Bell Eleven on the Late Late Show. After being told of his mistake, he cheered them off stage as Bell X Eleven. Yep, that's Pat Kenny.
For once at a gig in Germany, I wasn't asked to stop talking by other people, possibly because everyone was chatting throughout the whole set. Only when the lads went off did people realise the music stopped and so they kicked, screamed and hollered for more. When the lads came back out for the encore they went back to chatting again. 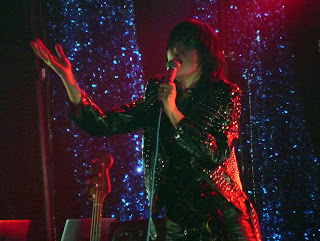 Actually, it was the second time I had been to a gig here and had not been asked to stop talking. The night before I had seen Yeah Yeah Yeahs at Columbiahalle. Great but short. One hour five mins. Including encore. €25. 'Nuff said. I was on my own for most of the gig, hence the reason for me not having to talk.
Afterwards I had to wait a staggering seven minutes for the U-Bahn home. Seven minutes! I don't think they even put on any extra ones. I was wondering how all the crowds were going to fit on it when it arrived, bracing myself to push, kick and punch my way into the carriage.
There was no rush however, no pushing, nothing. Everyone simply strolled onto the train calmly, and sat down. I even got a seat! My fare home was included in the price of the concert ticket. As I tucked into my large bag of Erdnüsse I wondered if it wasn't just too easy. Where's the challenge?!