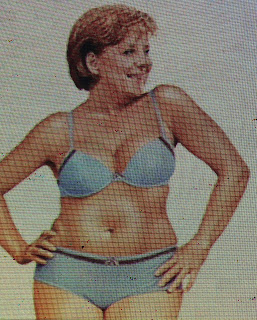 Angela Merkel is a fine lump of a woman. Anyone who ever had any doubts had those doubts quashed decisively by a giant billboard which is illuminating (in more ways that one) the famous Kurfürstendamm in Berlin.
Angie poses suggestively in just bra and knickers in a mocked up image for an underwear company which is inviting people to trade in their old jocks to get €5 off a new set of undies. You couldn't make this up!
Of course, I had to go out to see it with my own eyes and I wasn't disappointed. Standing there last Monday with her hands on her hips, posing coquettishly with a mischievous glint in her eyes, Angie practically winked down at me.
She had gathered quite an audience, with a small crowd assembled beneath her to share in her glory. I conducted my first ever interviews in German to find out what people thought of it.
"Ihre Nacktheit?" one girl replied. Yes, her nakedness. What do you think of her nakedness? "She's going to be very annoyed by it, but I think it's good." She blabbed on about the political implications and the impact it may have on the September elections. Right on sister. Another guy, an absolute mongo, was more forthright. "Es ist gut, ja." His mongo wife beside him gave dagger looks.
Merkel herself is refusing to comment on the billboard. I suspect she's secretly delighted with all the attention. The saucy minx.
Behind her, on the billboard, was a line of her political foes and buddies, also half naked. Of course, it made me wonder what such a billboard in Ireland would look like. Could you imagine? Harney, Cowen and co.? Jesus. They'd be picking people off the street.