Smoking out the ban

Berlin must be one of the last places in Europe where pubs and clubs are filled with great big clouds of dirty smoke. This city's smokers are so intent on destroying their own health they're willing to destroy others’ as well, and the situation is now worse than ever before. 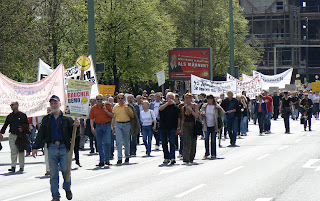 The smoking ban had been introduced in January last year, only it was left up to bar owners to allow customers “get used” to the enforcement. Thus some places allowed smokers puff away as before until July, when the overall ban was due to come in.

Anyway, legal challenges were made leading to a spectacular government U-turn, the likes of which is normally only seen from the Irish government. Small pubs which specialised in “drink-based small gastronomy” (getrankegepraegte Kleingastronomie) were excluded from the ban.

It’s a fucking joke. Most pubs in Berlin are small cafés anyway, and their owners have done all they can to ensure they qualify for exclusion from the ban. (Smaller than 75 sq. metres; no food; no adjoining room.)

Now it seems there is no ban at all. It’s as if smokers, terrified at the prospect of a ban being successful the next time it’s introduced, are choking as many cigarettes into themselves as possible.
In these small unventilated venues, there’s nowhere for the smoke to go but into passive smokers’ lungs. Clothes and hair stink, and hangovers are amplified thanks to the fumes. 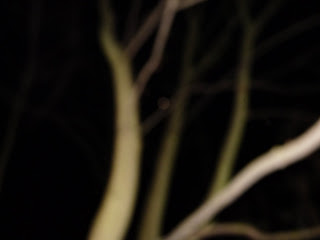 I had tolerated smokers and their habits because I was once one of them. Now however, I tolerate no more.

Last week was the final straw. Myself and Jenny went to the cinema at White Trash Fast Food to watch a film with Serge Gainsbourg, himself of course a notorious smoker. (He didn't come with us; he was in the film.) During the screening, wafts of tobacco smoke kept making their way towards us. At first I put it down to the skills of the director and the magic of French cinema - you really feel part of the action.
It was no illusion however. People were really smoking. Smoking! In a cinema! Casually sparking up and puffing away, not one shit given for other cinema goers.

On the way out, the snotty cashier unapologetically informed us it was the “Smoking Cinema”. Not a metaphor. A cinema the self-endangered smokers could gather to watch a good film in clouds of their own smoke. I don’t know how that fits in with the “ban” but fuck it, they can keep it.

Ironically, this isn’t the first smoking ban to take effect (or not as the case may be) in Berlin. Smoking was banned here in 1723 until the ban was repealed in the revolutions of 1848. The Nazis also had some sort of ban, but then again, there weren’t a very liberal bunch and they banned a lot of things. 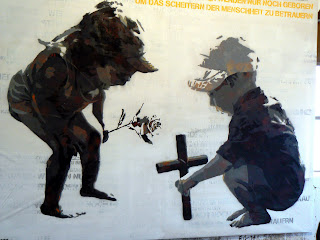 Ireland, of course, was the first country to introduce a comprehensive smoking ban on March 29th 2004. One thing the government can claim credit for. It’s so incompetent however, I can’t believe it was intentional. U-turn on the U-turn perhaps.
I don’t know anyone who would bring back smoking in pubs there. Not even smokers, who now enjoy the social opportunities presented over a shared cigarette outside. Many a romance has started with the immortal words: “You got a light love?”
The percentage of smokers has actually increased in Ireland since the ban, but this probably says more about the Irish psyche rather than anything else.
Labels: Berlin