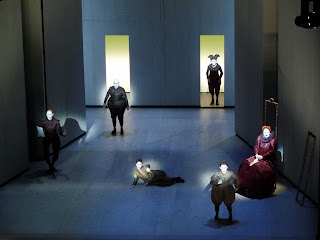 Tonight I went to the theatre. To see Shakespeare. Believe your incredulous eyes, it’s true!
Shakespeare’s Sonnets to be precise. The great Rufus Wainwright was doing the music so off I went to the Berliner Ensemble. And it was great!

I didn’t arrive in style. Everyone else did. Hoo-haws in fancy dresses, earrings and high heels, stinking of perfume, accompanied by monkey suits. Sipping from champagne flutes as they waited in the evening sunshine on the lawn. Ja Ja! (Without the Dublin 4 accents.)

I arrived on my bike meanwhile, sweating like a hot pig. Jeans and conspicuous bright yellow Mexican wresting t-shirt. I had been wearing it as a token of solidarity with my Lucha Libre buddies. (If one of them sneezed near me however I’d run a mile.)
Actually, pigs all over Germany were trembling in their trotters today, their curly tails quivering at the news the dreaded swine flu reached the country. Three cases, two in Bayern (Bavaria) and the other in Hamburg. A Hamburger with pork flu. Now that’s ironic. 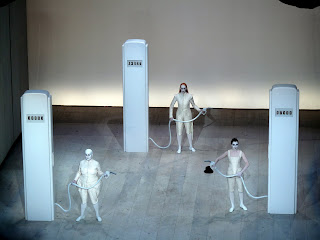 But back to the show. I ignored the stares and took my seat in time for the opening. Then the singing started... in German. I couldn’t believe it! I figured Shakespeare and Rufus would have to be in English, but no...
As it turned out it was a blessing in disguise. I - like most people forced to study Shakespeare in school - hate the fucker and his incomprehensible language. “Wherefore art thou?” and all that. Who talks like that? Unnecessary Es thrown around everywhere. Look at the end of his name for God’s sake! Maybe he just couldn’t spell, but whatever – being forced to decipher him killed any possible admiration I may have felt for him.

Ironically though, it may be through German that I may have found appreciation for him. Not that I had anymore of an idea of what was going on, but at least I felt I was learning something.
The music, dancing, costumes, lighting and effects more than made up for my language insufficiencies. Weird and wonderful characters pranced their way hypnotically around the stage, while the theatre was brought to over-sized life by Rufus’ magical musical scores. 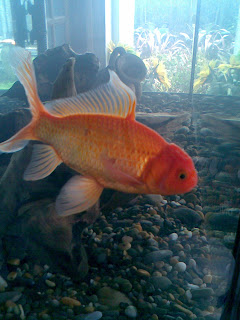 A fish was once named after Rufus in Ireland, and I sometimes think of poor Rufus and his tank-mate, Jaws 2. I think Rufus the Fish has since gone to the great goldfish bowl in the sky, but I got a message from Noddy lately to tell me Jaws 2 was doing well:
"I forgot to tell you bud, jaws is alive and doing well and big as fuck. I scooped him up from the pond in wicklow over xmas, he lived in a bowl for bout two weeks then i used him to set up my new tropical tank but inevitably he had to go cause the temp wouldn't suit him so now he is residing in Jim Howlins pond in Ballinteskin with a whole bunch of playmates." 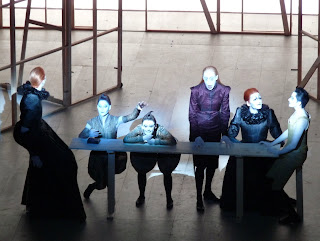 I haven’t been to a concert or show in Germany where I haven’t been asked to stop doing something. Usually I’m asked to stop talking at concerts. Sure there’s nowhere better to chat!
This time an outraged woman asked me to stop taking photographs. (In fairness, the camera did seem to be clicking extra loudly tonight.) The pictures weren’t great in any case, so I put it away briefly and concentrated on the show.

“Are you richer now than you were before?” one of the characters asked, before he answered himself: “Nein.”
“Damn right,” I thought, remembering the €5 I had callously sacrificed to get in.
The sense of loss didn’t last long however. Financially poorer now I may be, but I’m richer inside.

I did figure out the Sonnets were about Life, Love and Death, and I decided to myself that these are the only things that matter anyway.
“My lease is almost up,” the hero said (I think) at the end, referring, presumably, to his life. 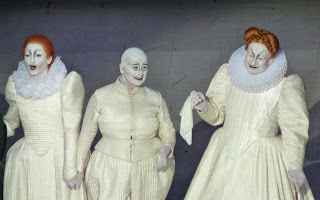 The final applause was tremendous; everyone clapping like flat-mickeyed seals for 10 minutes or more. It actually became uniform towards the end with everyone clapping at the same time.
Still, it was deserved. Maybe that Shakespeare fella wasn’t so bad after all.
Thanks Rufus!
Labels: Noddy