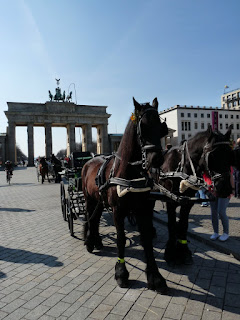 Recession? Financial crisis? Global downturn? Not in Berlin. One thousand shoppers queued to get into the new Saturn electronics store on Alexanderplatz last week, before running up the escalators to snatch whatever home entertainment systems their fat arms could carry. Special security was put in place to deal with the crowd which gathered outside for the midnight opening. Midnight! All queueing with their chubby faces pressed against the shiny new glass doors, salivating at the thought of spending money.

It's capitalism gone mad Ted. Honecker's worst nightmare has come to pass. And in Alexanderplatz - the centrepiece of the East German socialist model! He must be turning in his grave. Well, he would if he wasn't cremated... 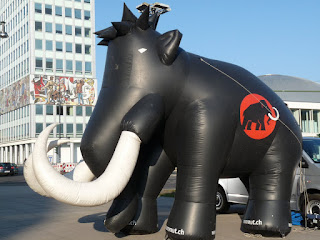 There's the prospect of more salivating shoppers beating doors down tomorrow. A new Karstadt department store opens in Steglitz, and I met a giant mammoth today who told me the new Mammut "flagship store" opens its doors near Alexanderplatz at 10am.

Building meanwhile, continues at a frightening pace - apartment blocks, supermarkets, cafés and restaurants are popping up like mushrooms after the rain. A forest of cranes around the corner betray the location of the huge new "secret service" complex. (I know, not very secret if everyone knows about it.)
Anyway, everyone seems to be lashing money around like it's going out of fashion. Although out-of-fashion is usually in fashion in Germamy. Everyone's spending money, that is, except me. Having my wallet stolen and no bank cards for three weeks put paid (ha!) to that.

However, my new credit card arrived on Monday, so I went a bit mad myself, buying a new jacket to replace the one stolen in Mexico.
I'm glad I bought it, for as soon as one buys a jacket, it's no longer needed... 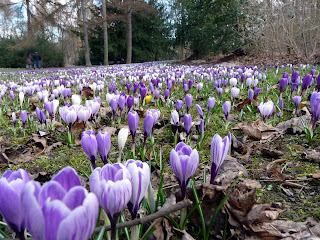 Spring arrived on Tuesday! At 11.17am. Or possibly a minute later. It climbed to 16°C and I haven't seen a cloud since! Tables and chairs outside cafés were crammed with yuppies drinking frappuccinos and caramel macchiatos. Eyes shielded from the sun's devastating rays by trendy sunglasses. I even saw one eager not-yet-hatched-chicken-counting lunatic wearing shorts, t-shirt and flip-flops! What a difference a week makes. We're supposed to see temps of 21°C tomorrow! At this rate it won't be long before we're skinny-dipping in the Spree again! But enough about the weather...

Today I emailed 39 editors and sub-editors from 37 of the world's newspapers with quite possibly the most informative, engaging, eloquent, and well-written travel article ever written. Ever written. So far however, only The Irish Times has shown an interest; based no doubt on the spike in sales last Saturday following the publication of the Stasi prison article.
The rest remain ominously quiet. Most had already replied to earlier pitches with doom and gloom, bleating about lay offs, wages being slashed, a freeze on buying articles and staff all running away to join the circus.
One more article. That's all I'm doing. If there are no bites then I'll have to get a job in a pub.
Labels: Berlin Frühlingsgefühl spring