Easter is mad. Madder than the March Hares which seem to abound here despite the fact it is March no more. Which just proves their madness.
They’re everywhere! Predominantly made of chocolate, but sometimes other materials and taking other forms. It seems rabbits and chocolate are sacred here at Easter, as are coloured eggs which are hung in trees and worshiped over the holiday season. 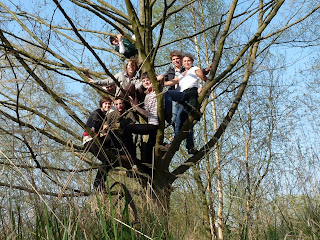 Yesterday, I was lucky enough to be invited to spend Easter with a bona fide German family. I accepted their hospitable invitation and a chocolate hunt quickly ensued with everyone searching under every rock, looking in every flower pot, and peering into every dark hole in the hope of finding some brightly-wrapped chocolate rabbits or sacred eggs. Those rabbits are sneaky fuckers, sometimes burrowing like their flesh and blood cousins into places so hard to find you’d wonder how they are found at all. Germans however, seem to have a nose for chocolate, and I’m pretty sure none but the sneakiest chocolate rabbits managed to escape. 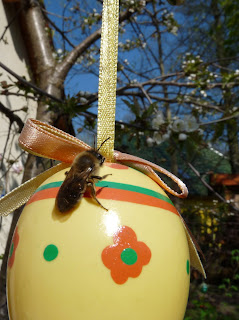 A large table crammed with Kuchen (cakes) and Sekt (sparkling wine) offered respite after the excitement of the hunt, and for a brief period in the day the rabbits were forgotten. With more tarts than Club 92 on a Saturday, there was barely time to talk, as one delicious cream, strawberry or almond slice of cake followed another.
The adults were then left to talk, as the “children” went for a walk, each group secretly delighted with the freedom temporarily granted by the parting.
Food always brings people back together however, and the group was 15 once more as mountains of food were served from the barbeque, each steak accompanied by its equivalent in salad, baked potato or vegetables.

It was the first barbeque of the year, (on April 12th!) and with it came the promise of many more. Spring may have arrived less than two weeks ago, but already it seems like summer. Nude sunbathing is just around the corner. In fact, Friday was my first sighting of a nude sunbather, although the startling sight of his skinny, wrinkly arse made me pine briefly for the return of winter. It’s strange, but the people who shouldn’t bare all are always the first to do so. 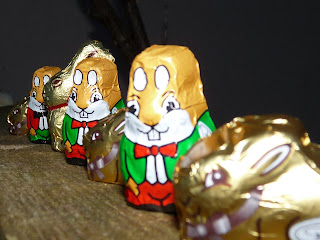 After dinner I learned why the rabbits were so eager to hide. Those with the double misfortune of being made of chocolate and not being sneaky enough were consumed without ceremony. Even the ones who disguised themselves as Toblerone bars or Kinder Schokolade couldn’t escape. Just too delicious for their own good.