Topography of a dark past

Getting to grips with Berlin/Germany's dark past is no easy task. Living here, one generally tends to ignore it and get on with day to day life, but when visitors from Ireland and California come visit, of course the past is a morbid attraction.
Wednesday took us to Topographie des Terrors, a free outdoor temporary exhibit on the site of the former Gestapo and SS Headquarters, where photographic evidence of the horrors of the Third Reich are displayed for all to see. It's heavy, disturbing stuff, as one would expect. 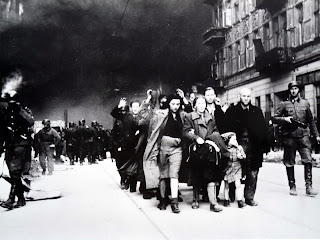 Pictures of Hitler's rise to power; his alliances with Heydrich, Himmler et al; Nazis on the march; the destruction of democracy; book burning; and then of course the horrors of war itself > Peasants being shot by firing squads; mass graves; bodies hanging from trees in Russia; Jews being rounded up for transportation to camps; "random prisoners" being rounded up in Berlin; hurried scared people, hands in the air, marched at gunpoint with smoke billowing from burning buildings behind... Death. Destruction. Despair. It's horrible.
For me one of the most disturbing aspects was the sadistic nature of some of the perpetrators; an SS-prick smiling as he cuts off a Jewish man's beard in a public humiliation; soldiers laughing as they shoot defenceless peasants in the back of the head. It makes me wonder about human boundaries; how people can actually do this to others. 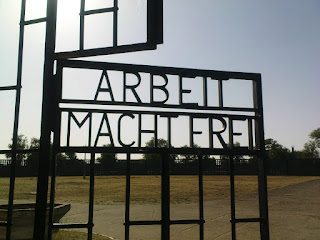 It was the same last year when I went (reluctantly) to see Sachsenhausen Concentration Camp to the north of Berlin with Noddy and Sully. (We were probably the first people to ever break into a concentration camp - it was closed at the time.) Although we didn't see pits of bodies or piles of skulls, being alone in the camp, on an eerily beautiful still day, and just imagining the horrors perpetrated on countless innocent victims, was enough for me to question everything.
Did I really want to move to a country where this shit went on some 60 years ago? Surely everyone was involved. How innocent are the innocents? Why didn't they stop the madness. What about people now? Has anything changed?
I even questioned the friends I was making, the people I liked. Everyone. Everything.

After Wednesday I was looking at people on the U-Bahn. One tall guy in particular was chatting and laughing with another. I could quite easily imagine him as a prison guard, or a sadistic SS-member taking pleasure from the torture of others. In my head this guy was guilty, despite the fact he wasn't alive at the time of the crimes. 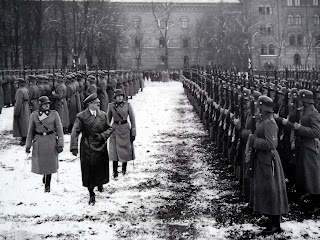 Of course there was opposition to the Nazis, particularly in Germany itself. Opponents however, were invariably rounded up, tortured and terminated, along with - to discourage other opponents - family members and friends.
I found out I would probably have been arrested by the Gestapo either for being an immigrant (ironic given Hitler was Austrian) or a journalist, earning myself a blue triangle for the former and red or black for the latter. 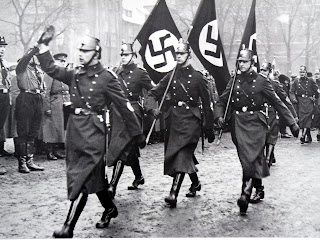 Topographie des Terrors showed me everyone was guilty (bar the few notable exceptions), either though inaction or direct compliance. By everyone, I don't mean every German - I mean every people. The French actually rounded up their Jews for the Nazis to murder. The Brits and Yanks initially appeased Hitler, not wanting to get their hands dirty, and then turned a blind eye to the atrocities because it didn't suit them to get involved. American companies actually supplied arms and fuel for use in German war machines, even after the US joined in the war. Money was to be made.
The Russians of course, were happy to carve up Poland and allow the extermination of ethnic groups. Other countries also rounded up their Jews and handed them over to the Nazis; a map of routes to Auschwitz showed a spider's web of transit across Europe.
Even the Irish, hiding behind the cowardly shield of "neutrality" cannot escape blame. Éamon De Valera offered condolences to Germany on Hitler's death. "Sorry for your troubles lads."
It's a brutal indictment of human behaviour, not just in Germany, but across the whole of Europe.

What's worse is that it could happen again. Rwanda and Darfur spring to mind. Even on Europe's doorstep, the United Nations shamefully ignored atrocities in Bosnia. The Srebrenica massacre occurred despite the village being under "UN protection" at the time.
Human rights abuses are conveniently ignored in China where the Olympic Games was "a success" last year, while it is too easy to outline the hypocrisy of American foreign affairs. 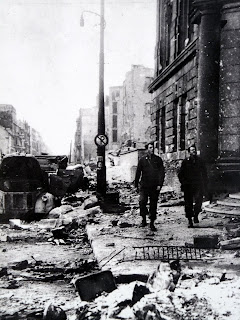 Other countries bury their shameful pasts and Germany could quite easily do the same, or at least sweep aspects of it under the carpet until the crimes becomes less in the eyes of time.
Instead however, I believe it is the only country which is doing the exact opposite. Concentration camps are kept open for visitors when others would destroy the evidence; memorials to murdered victims are built and maintained; the Synagogue around the corner from me in Berlin is under 24 hour armed protection; kids are educated about the camps on school-trips etc.

Willingness to learn from the past gives me confidence of a better future. We're talking of humans here however. Ethics versus money. I wonder if the lessons are being learnt.
Labels: Berlin history Hitler Holocaust Nazis Noddy Sully