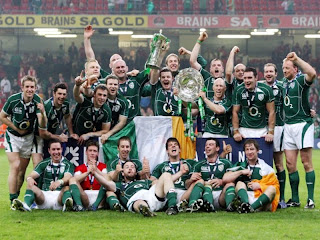 Sixty-one years we've waited, but now we can finally say it!!! Woohoo!!! We have the Grand Slam! Only our second since the first in 1948. Woohoohoo!!!!!

The Oscar Wilde on Friedrichstraße went absolute bananas after the final whistle went. I mean bananas. Once the unfortunate Stephen Jones missed his last-minute kick to allow Ireland claim a 15-17 victory, a primeval roar broke out, and all arms, pints and legs shot up towards the heavens in relief and celebration.
Whenever Ireland is involved there is misery involved. Thankfully on this occasion it was Jones'. Although justice was served on the night.

The pub itself was absolute mayhem. The poor oul' Germans didn't know what was going on. Two Welsh fuckers, who weren't even Welsh but English, were expelling the imaginative chant: "Waay-les, Waay-les, Waay-les....."
The Irish just roared. "AAAAArrrrgghhh!!" And then again: "AAAaaaarrrgggh!!!"
Helpful advice to the players was also issued: "Run, run, ruuuuunnnnnn!!!" "Heave, heeeeaave."
Or: "Kill him! Kill him! KIIIILLLLLL HIM!"
And that was me. My voice is gone. 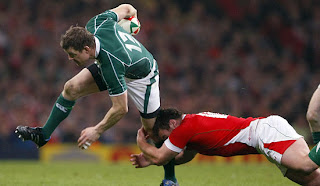 Amhrán na bhFiann was belted out by everyone in the pub. In Irish without the GAA interruption! The Fields of Athenry and Olé Olé Olé too of course, as were We Are the Champions, Whiskey in the Jar and for some reason known only to the singers, I Say a Little Prayer for You. (Forever and ever, You'll stay in my heart, And I will love you, Forever and ever, We never will part, Oh how I'll love you....)
I guess when waiting 61 years for something, forever doesn't seem so long.

They interviewed Jack Kyle after the match. On the victorious team in 1948, he confirmed he was as old as he looked when "my goodness!" was all he could say to express his emotions. George Hook looked like he had aged a lot too. Following Irish rugby down through the years comes at a price.
Thankfully now we can enjoy the reward. Woohoo!!! 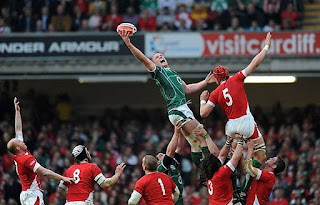 Superman will be looking for his Paul O'Connell pyjamas tonight...
Labels: Ireland Rugby