Such is Ireland's insatiable demand for shamrock, that it imports tonnes of the stuff from Germany and France every year. Mad huh? Apparently, in 2007 alone, the Emerald Isle imported almost 200 metric tonnes of clover seeds worth US$677,864 because it simply could not produce enough "Irish" shamrock on its own.
What the hell are people doing with the stuff? Sure they must going mad for it!
In future I'll be buying German shamrock to meet all my shamrock needs. Cut out the middle man I say! Begorrah. 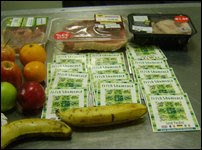 Meanwhile, it transpires that shamrock smugglers were foiled as they attempted to sneak shamrock seeds into the US via Washington DC on March 12th. Apparently, the federal agents swooped after the Aer Lingus flight landed at Dulles International Airport. Sixteen - yes, that's SIXTEEN - packets of seeds were found to have been on the offending aircraft.
Imagine the consequences had the evil smugglers had been successful! My God; it doesn't bear thinking about...
Federal agent spokesman Stephen Sapp confirmed the sinister seeds were destroyed, along with some pork and beef (and fruit evidently). Presumably the food was just a cover, but thankfully the real threat was discovered on time.

Perhaps now it makes sense why the Irish grow their shamrock in Germany. After all, if the shamrock had been used in a terrorist attack, the Americans would look for the source. Let's just hope there are no preemptive strikes.