We spent last night in Puerto Barrios (en route to Río Dulce). It's a dodgy city by all accounts, and I’m not going to contradict those accounts based on my stay there. We became slightly lost during our hunt for a half-daecent comedor shortly after we arrived, when it was late and dark.

Jenny decided to ask a woman standing by the side of the road for directions. The woman nearly jumped out of her skin! She genuinely looked terrified. She was visibly relieved when she realised we weren’t going to stab or kidnap her, and she gladly sent us on our way. 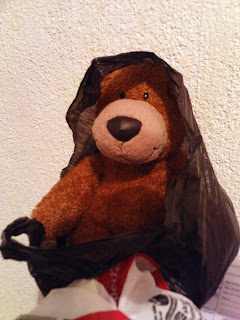 The flip side of all this danger however, is that Puerto Barrios is a cheap place to visit. Our hotel, Hotel Lee, might have looked like the scene for a drug deal from Scarface or worse, but it was only 70 Quetzales (€7) for both of us for the night. The meal around the corner was just 29Q, and a hearty one it was too, including two strawberry milkshakes, a chicken tortilla, enchilada, scrambled eggs and coffee.

The coffee, as the rest of the coffee I’ve had to suffer in this country, was truly awful however. It seems they import all the good stuff, and leave the shite behind for all the locals to drink. I guess it’s the same with the meat in Ireland, where all the good stuff is exported to France and Germany, and the locals are expected to eat arses, noses and anything else scraped off the abattoir’s floor.

(Guate, our new travelling companion, joined our party last night. As long as he pays his way and behaves himself I’m happy enough. To be honest, it could be useful to have a guard-bear with us.)
Labels: food Guatemala Puerto Barrios