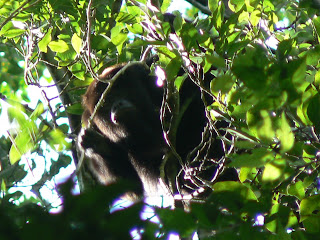 I saw my first wild monkey today! My first wild monkey!!
This fucker was LOUD. He roared and roared, before rustling his disapproval in the branches high above us. Apparently he wasn’t as happy to see us as we were to see him. He rustled and grunted and threw sticks down on top of us. Just being friendly in an inner-city Dublin sort of way.
He was part of a gang of howler monkeys who lived up to their names by making more noise than Croke Park on All-Ireland Final day. Scarier noise too, although perhaps not to a Waterford GAA fan. RRAAAAAARRRRRGGHH!!! (You can make up your own minds whether that was a monkey or Déise.)
Perhaps scarier again however, was the snake we saw just a few tense minutes’ walk into the protected jungle of the Biotopo Cerro Cahui. 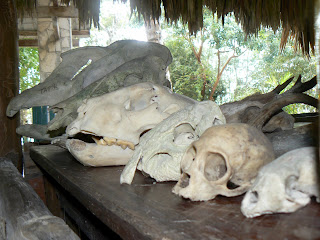 I suppose we should have expected trouble when we saw the jars of snakes and the line of skulls sitting on the entrance desk. We were warned the park was full of poisonous snakes, although the park ranger helpfully suggested the snakes never venture over the path. He lied. The path was barely discernable from the rest of the jungle, so how a wild snake was supposed to know they couldn’t cross it was beyond me.
After making our way in I walked on ahead of Jenny when suddenly she yelled: “Get back! Get back!”
“Get back from what?” I asked as I moved forward.
“Stop, stop!” she replied. 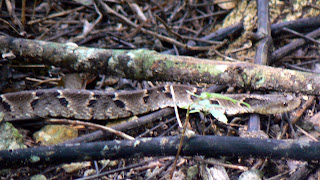 And then I saw it. The Snake. Still as a rock. Stripey scales. Beady eyes staring ahead. Unflinching.
As it turned out he appeared to be looking at the path. Maybe he was trying to figure out if he was allowed cross it or not.
We didn’t hang around; pausing just long enough for a quick picture before running on up the track. 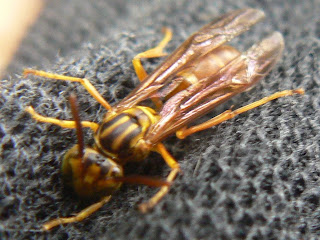 Ten minutes later I was attacked by two hornets. The fuckers stung my shoulder and head, with just my hair saving my head. I batted at them like a girl, before a real one jumped to the rescue, pulling the head off one, and somehow getting rid of the other. Again we paused just long enough for a picture, the mean little fucker trying to sting me all the while, moving his arse or whatever downwards as he tried inflict more pain.
We cautiously moved onward. All kinds of weird and wonderful birds flittered around. Butterflies followed suit. A woodpecker vandalised a tree. A squirrel scurried up another.
Then we heard the howlers. RRAAAAAARRRRRGGHH!!! We heard them long before we met our aforementioned stick-throwing friend. After his show of petulance we wandered on again.
A friendly group of spider monkeys put on another show high in the trees above us, but we couldn’t hang around too long; dusk was approaching. We didn’t want to get stuck there after dark! 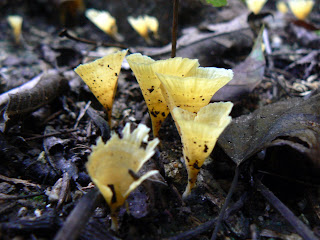 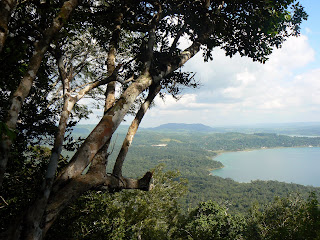