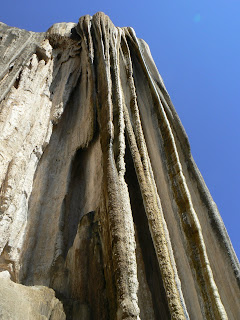 A waterfall of stone with no falling water where the water "boils" despite being cold. Welcome to the wonderful world of Hierve el Agua, a natural phenomenon of staggering beauty.
Seen from afar, it looks like water is actually cascading spectacularly over the top of this mountain, plunging steeply 30 meters onto the rocks below. The anomaly was created over thousands of years, as mineral water from deep below bubbles to the surface, bringing with it mineral deposits which are left behind to create 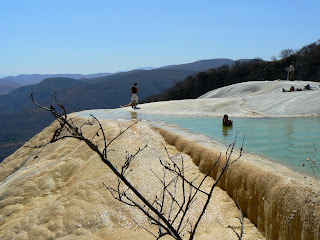 the illusion of a frozen waterfall.
A wide valley floor far below keeps the surrounding mountains at a distance, as if they give themselves enough space and perception to marvel at the scale and magnitude of nature’s creation. Deep turquoise pools find their home on top of the smaller 12 metre petrified “waterfall”, and bathers find it impossible to resist plunging into the inviting waters.
Standing on Hierve el Agua, which translates as “The Water Boils” in Spanish, it’s easy to see why it was sacred to the ancient Zapotecs. They built a series of irrigation channels in the area between 300 and 1300 AD.
I had been brought there by Pablo and Santiago who are driving from Florida to Buenos Aires and doing social work en route. (I wasn’t the social work in this case.) Of course, being Argentinian and Colombian they brought a couple of girls along too: Carola from Argentina and Heather from Canada. I can see now why boys with cars always get the girls. I was just thankful they didn’t bring another girl instead of me. 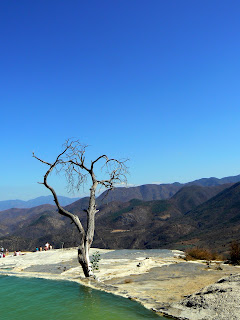 The peace, isolation and serenity of where we found ourselves can make a man do crazy things. For me it was my first taste of yoga, as Carola somehow coaxed us into flailing our arms, mimicking helicopters, and generally doing things in public we would never dream of doing at home. 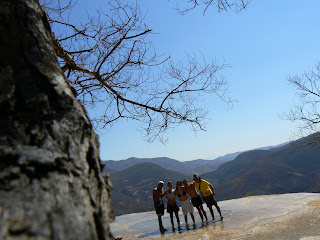 Other tourists looked on in amazement but the five of us carried on regardless. Hierve instils a sense of apathy towards other people’s perceptions.
Swimming and yoga can work up quite an appetite however. Being poor backpackers we skipped the comedors on site, proceeding instead to the nearest village of San Lorenzo Albarradas. Delicious quesadillas and enchiladas were immediately flung on the fire oven and served up for half-nothing. Meanwhile a little boy, about four years old, terrorised the establishment's dog by jabbing him repeatedly with a sharp stick, much to the amusement of the boy’s grandmother.
The dog’s yelps reminded us that life is particularly tough in rural Mexico, a fact which was underlined later when I found one of the dog’s pups eating a used discarded nappy. 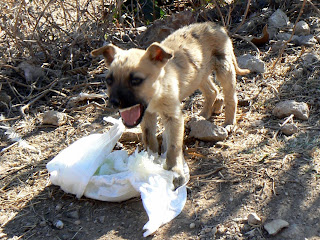 He was the lucky one – he had just fought off one of his siblings for the privilege. 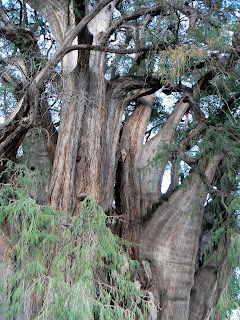 On our way back to Oaxaca, we called in at Tule, to see the “world’s largest tree”. Hmmm... I’ll admit it was a big tree, but it's hard to tell when the world's second-largest tree isn't nearby. I’m pretty sure Tule’s is not the world’s largest. I suspect another case of innovative thinking from the Mexican tourist board.
Labels: México waterfalls yoga Zapotecs