I have a new team! No, I haven't abandoned Theresas Mütter; how could I? (I haven't given up hopes of our second victory. These things take time as the last post confirms.) Nor have I abandoned Real Madrid, despite the shameful capitulation to the English.
Now however, there's also my new team: Freiheit 06 Berlin. They're a serious outfit who actually look like they could win a game.
We lost. But I scored a goal! Deflected, but a goal never the less. I won't give you the final score.

The best thing about this team however, is the kit. Jeeesus - talk about swanky. Dark blue tops with a yellow trim. With a sponsor on the front! (Never heard of them before.) Numbers on the back and everything, with Freiheit 06 written above, and Berlin below. I was number 3. Roberto Carlos would have been proud.
We also have matching shorts, with swish yellow stripes down the side and.... matching socks! You guessed it - yellow and dark blue. I'd never been so well dressed before. They definitely weren't Tipperary colours by the way. I wouldn't have allowed them touch my skin.

We played against a team called Union Jack. As if I needed any extra motivation! But I wasn't to be. The weather was simply atrocious. Polar bears would have been sent scampering for cover. The wind howled, the rain lashed... I know, I know - a summer's day in Ireland - but then there was the COLD. The Berlin cold. Jesus Christ! My arms were actually in pain. Seriously. They really hurt!
To make matters worse, in the second half a hailstorm decided to dump its load on us. Balls of ice belting down just to extinguish any hopes of fun. 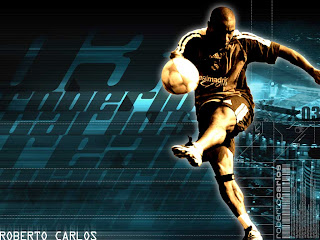 Still, I enjoyed it. Kinda. The kit made it worthwhile. I didn't bring a camera, but the image to the right will give you an idea of me in action on the night, before telling the lads to calm down to protect our five goal loss. Although it might have been six, maybe a seven goal loss. Sure who's counting anyway?
Labels: Berlin