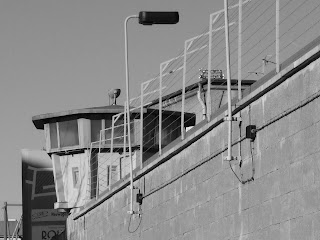 What better way to spend St. Patrick’s Day than prying into another dark chapter of Germany’s past? It was East German in this case, as I took Jill, Tony, Fats and Tanya to see the former Stasi Prison in Hohenschönhausen in East Berlin.
Thankfully, the Stasi guards were no longer there, and their chilling methods of interrogation and intimidation no longer in practice, but nonetheless, we got a fascinating insight into the inner workings of a state in constant paranoia. It was mad, or Wahnsinn as the locals would say.

The prison itself was only shut down in 1991, by which time some 250,000 political prisoners had passed through its doors – a quarter of a million! - many of them never to be heard of again.
Political prisoners meant anyone suspected of being against the East German regime, having pro-Western sympathies, or anyone associated with same. Having a West German newspaper was an offence, as was listening to Western music. Phones were tapped, and everyone was bugged, listened to, spied upon. Apartments were searched at will. Freedom of expression and belief were very much off the menu. 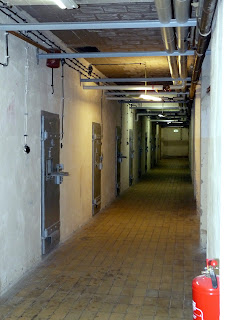 The Stasi Prison site at Hohenschönhausen was originally used by the Russians immediately after World War II, when they brought Germans here for “de-Nazification”. Known as Das U-Boot because prisoners were kept in underground cells with no natural light, the old prison could only be described as a hell-hole.
Prisoners, innocent more often than not, were rounded up and kept either in tiny isolation cells or cramped group cells, each containing a wooden bench and nothing else. Not a blanket, sink or shower – nothing except a bucket for a toilet. No water or toilet paper was provided, leaving prisoners to live with their own waste.
Twelve people were stuffed into each group cell, sharing the wooden bench. They could huddle together for warmth. Prisoners had no idea whether it was day or night due to the lack of daylight, and sleep deprivation was a favourite pastime of the guards. Inmates would be kept awake for days at a time, warned not to sit or lie on the bench. Carpets were laid outside the cell doors so prisoners had no idea whether guards were outside looking in or not.
The smell must have been unbelievable. Prisoners kept the same clothes on throughout their stay, possibly for months. No showers were ever provided. Underwear never changed. Disease and sickness were rampant.

Apart from straight-forward beatings with truncheons or metal bars, or being handcuffed for days on end - water-torture was also used, where drops would fall onto the back of a trussed-up prisoners’ head. He/she could only move the head forward slightly to escape the unbearable sensation, but doing so would submerge the face in another bucket of water. They could be left there for hours, or days – depending on the whim of the guards. A dark waterproof room was also used, where prisoners were left naked in cold water to the knees or higher, sometimes for days. 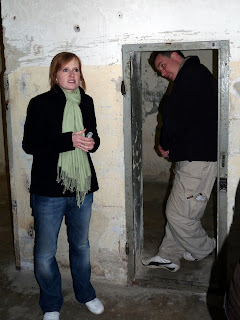 Other prisoners were boarded into a tiny confined space in a wall, where the lack of any space would render their screaming muscles immobile after a few hours, upon which they would be released, crashing to the ground like toppled statues.
Poor Tony, the tallest among our guided tour group, was called upon to demonstrate this, but luckily he didn’t have to stay there long enough for the effects to take hold.

Everything was done to get inmates sign pre-written confessions. Confessions were conveniently written in Russian, so prisoners had no idea what crimes they were confessing to. Nevertheless, everyone signed a confession sooner or later. Staged trials then determined prisoners’ fates. Most were sent to slave labour/death camps in Siberia, never to return.

In 1951 the prison camp was handed to the East German Stasi (Ministerium für Staatssicherheit). They continued the work of their predecessors and in 1960/61, with a mind towards psychological torture rather than physical, built a new purpose-built building with prisoner labour beside the old U-Boat prison. 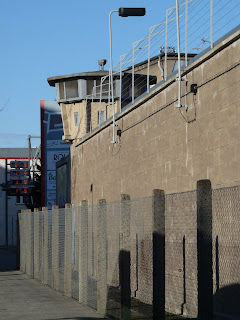 Because Hohenschönhausen was not marked on any maps, locals had no idea what was going on behind the guarded walls of the complex. Even vans bringing prisoners through the gates were marked as supermarket delivery trucks, bakery vans etc. so they wouldn’t arose suspicion. Secrecy was of paramount importance. Prisoners kidnapped in Berlin itself would be driven around in the countryside for five or six hours so they had no idea what part of Germany they were in.

Suspects would be snatched without warning on their way home from work, or at home, while shopping, on their way to meet friends etc. They simply disappeared; friends and family had no idea where they were, and very often never heard from them again.

As soon as they arrived, the idea was to instil in them a total feeling of helplessness; a feeling of being at the total mercy of an all-powerful state.
New arrivals were searched and given outfits. To compound their discomfort and make them feel stupid, prison uniforms were always either too small or too large. Prisoners were never called by name, but by the number corresponding to their own individual cell. 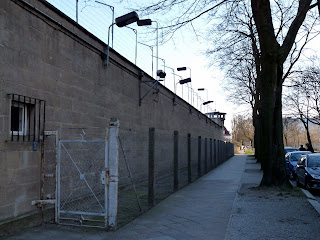 Inmates could be kept for three months in total isolation, with nothing but the simple one or two-word commands of the prison guards in the way of human contact. Always alone.
A traffic light system on the corridors ensured prisoners never even met in passing. Unless, of course, the guards deemed it useful to garnering information. After two months of total solitude, a prisoner might be brought to another cell, only to catch a fleeting glimpse of his/her wife or husband as they too are being led away for questioning. Of course, they wouldn’t be allowed communicate, but the psychological impact after weeks of solitude must have been catastrophic.

No staff members were armed, for fear a prisoner might somehow seize a weapon. Instead a simple security system was in place, where a guard could trip the alarm by pulling a wire which ran at shoulder-height on every wall. Other guards would then rush to his assistance.
No prisoners ever escaped however, testament to the ingenuity and brutal efficiency of the system and guards.

Cameras above the stark corridors ensured even the prison guards were kept under surveillance. Nobody was trusted in the Paranoia State. 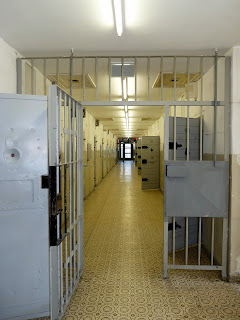 The collection of information was the raison d'être for the Stasi Prison. There were 120 interrogation rooms provided for 103 cells, so every inmate could actually be interrogated at the same time. The rooms were all sound-proofed of course.
Like bad school kids, prisoners were made sit in the corner of the room for interrogations which could last between five and ten hours straight – sometimes more. Sleep deprivation was again a favourite method of getting prisoners to cooperate.
Interrogators were chosen carefully to suit a particular prisoner. The Stasi built a mountain of knowledge on every citizen, so if they knew someone was very influenced by their father for example, they would pick an interrogator with the same mannerisms or who looked like that person’s father.

Operative Psychology was used. This involved suggesting misfortunes against family members: “Your parents’ car is quite old. It would be terrible if they had a tragic accident.”
Or: “Wouldn’t it be awful if your children never saw their mother again?”
A prisoner might be told their mother had committed suicide because she couldn’t bear having a son in prison.
Stasi agents referred to this treatment as “Dissolvement of the soul”. 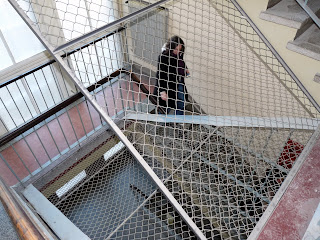 The stairs of the prison were fitted with wire fencing to ensure no one could fling themselves to their deaths. People were of no use to the Stasi when they were dead. Information can only be garnered from those who are alive. Mirrors in cells were not made from glass for the same reason.

Many former prisoners later died of leukaemia-related illnesses, believed to have been contracted after being exposed to radiation from X-ray machines at Hohenschönhausen. 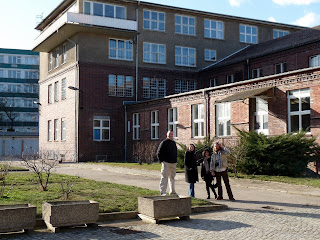 By the time East Germany ceased to exist on October 3rd, 1990, the Stasi had on its books a full-time staff of 91,000 – this for a population of 16 million. They also had a network of amateur spies and informers totalling 180,000.
Thankfully the Ministerium für Staatssicherheit’s campaign of terror and intimidation was brought to an end by the fall of the Berlin wall and the reunification of the country, although the last prisoner only left the prison in 1991.
The Stasi’s impact is still being felt to this day however, and no amount of Ostalgie would ever bring them back.
Labels: Berlin Stasi