The damn snow scarpered as soon as it heard I was returning to Berlin. Typical! A couple of days before I got back, the city was glorious, covered in a thick white carpet, inches deep. A clear sharp blue sky above suggested a new beginning. A comforting crunch accompanied every footfall, and the sun gently glistened off the snow, sending sparkles of light towards the trees' laden branches. 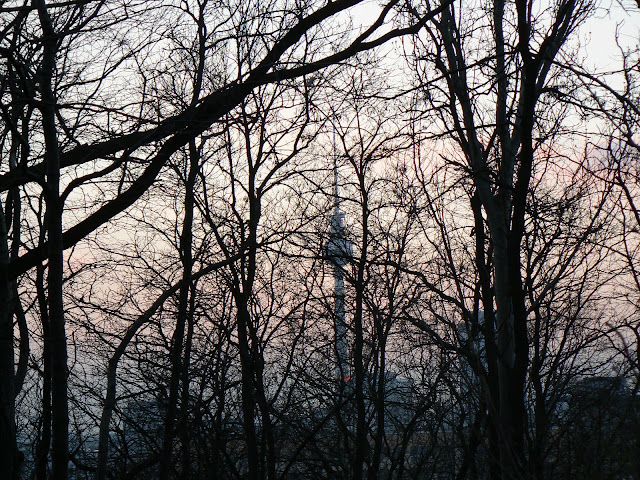 Or so I imagine it was anyway. Despite the lack of snow it's good to be back. It helps when you're met at the airport by a beautiful girl with flowers. One quickly remembers the things that make it so special to live here: the bread (my beloved Kurbiskernbröt), the bicycles, the squealing old trams trundling by, the gurkens, Hefeweißbier, the hookers on Oranienburger Straße with their unnatural Barbie doll figures, the forthrightness of the locals... Seriously, in the local supermarket today, the poor cashier was under a bit pressure as the queue started to get longer and longer. He was on his own. Instead of getting sympathy however, he was roared at by a gobshite behind me: "Zweite Kasse!" (Second cashier). Even other people looked shocked at this. A minute later, when his lordship's request went unfulfilled, he roared again. "ZWEITE KASSE BITTE!!!" I presume he eventually got his eggs and milk. An old guy too, in a suit - they're the ones you need to watch.

It's damn cold here. Not as miserable as Ireland, but cold, the kind of cold that makes you feel alive; the kind of cold that makes you wish your jacket wasn't stolen in Mexico.
Now that the snow is gone however, I get the feeling people are just waiting for the weather to improve so they can take off their clothes and jump into the nearest river or lake. Germans are never really truly happy unless they're naked, preferably in public places. East Germans in particular. Maybe it's a backlash from living in the Stasi-controlled state for so long. I have to say I too like the feeling of naked liberation, and can't wait for summer again.

In the meantime, I've been adding photos to posts from the past couple of months, starting with "Antigua" on December 28th and working towards the present. I didn't realise I wrote so much. There was a load of stuff I meant to write about too, but I find one has to strike a happy balance between experiencing experiences and writing about them. A very happy balance in my case...
Labels: beer Berlin cold FKK Kürbiskernbrot snow