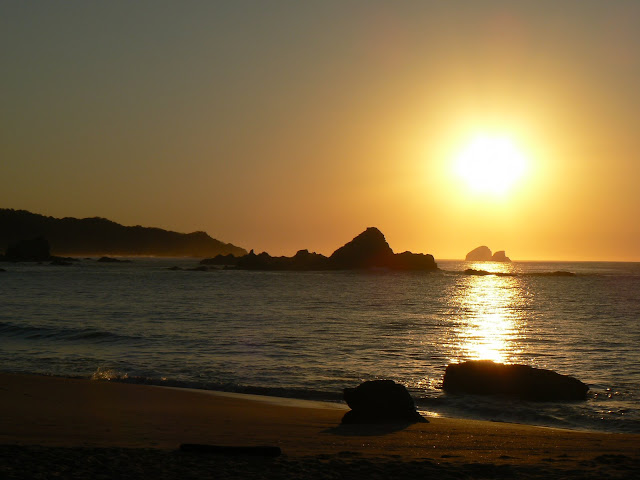 Last Wednesday I got up at the ungodly hour of 6.30 a.m. but with good reason - there was a whale of a time to be had! A local fisherman was to bring us off across the first Pacific waves of another beautiful day to see whales, dolphins and sea turtles in their natural environment, followed by a spot of snorkeling near the rocks.
It didn't take long to see our first prize - a lone giant of a sea turtle just paddling along quietly minding his own business. The sight of a boat crammed with camera lenses pointed towards him must have given him a shock however. With a flip of his flippers he plunged deep beneath us, and we were left looking at blue sea once again. The unflippin'sociable flipper. (Although he had good reason to dive as I was to find out later on.)
A short while later we found another. This guy too was simply paddling along minding his own business. Where he was going or what he was thinking in the middle of the ocean was anybody's guess. Like his predecessor, he too dived once he realised there was a boatload of tourists gawking at him.
More and more of there shy creatures were soon found floating and paddling in the middle of nowhere. Sometimes a cheeky bird would hitch a lift on one of the giant beasts' shells. Every time however, it was the same reaction as a motorist driving through Carlow: dive, dive, dive!!! 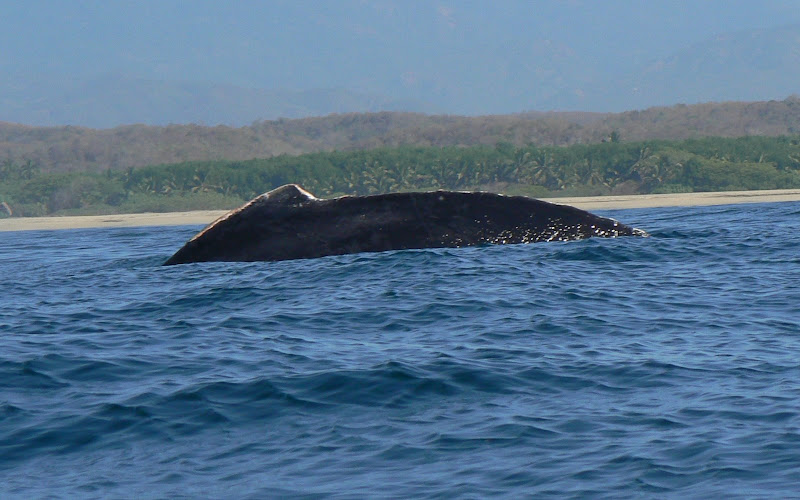 We bobbed up and down in our boat looking for dolphins and/or whales. Funny how fickle one can be - we'd had enough of turtles.
Suddenly we noticed a disturbance up ahead of us. A big jet of water went shooting into the sky with a whoosh and we knew we'd found what we were looking for. Whales! At least two of them were ahead. Taking turns to surface and shoot water and air out their blowholes. There was so much blowhole action I thought I was at a sitting of the Dáil - possibly an even rarer occurrence. I could mention Mary Harney but that would just be mean and petty so I won't.

The whales, it seems, are just as unsociable as their turtle buddies. They didn't hang around for long. We were left bobbling up and down and we continued our search for the dolphins. For quite possibly an hour we bobbed up and down in increasingly high and strong waves. I don't know who named that sea Pacifico but it must have been either a lunatic or an attempt of irony.
Not even an oul' turtle floated by and my mind started to wander. I began thinking crazy thoughts. I wondered how long it would take a seaman to go mad from the incessant bobbing up and down in the middle of an ocean with nothing to do. How long would it take for scurvy to set in? Did anyone bring vitamin C tablets? 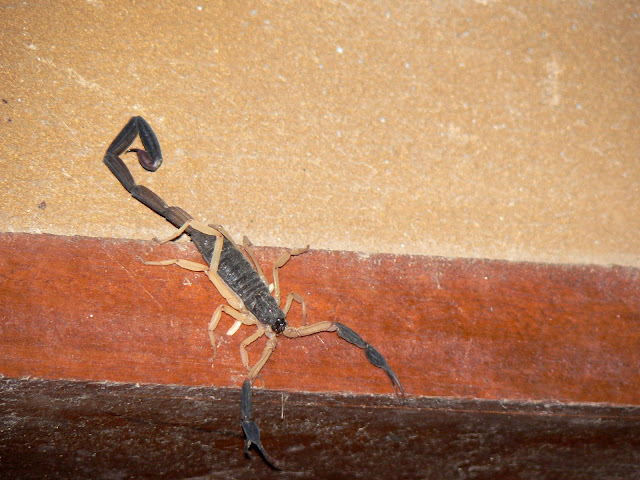 I thought of the night before, a long hard night when we ended up in La Luna Nueva where the whole village of Mazunte seemed to gather for a spectacular acrobatic show from the roof.
As with a band in an Irish pub however, nobody paid any attention to the show and everyone chatted, laughed and drank and did anything but look up. That was until a huge black scorpion made an appearance on the wall separating our group from the dance floor. He walked slowly up the wall, then across the doorway over people's heads, down the other wall, before starting back the way he came! Those still sober enough to freak out did, while others just carried on drinking.
The damn scorpion didn't seem to know where he was going.
I watched him walk directly over people's heads and waited for him to fall on one of them. Eventually even that became boring however, and I went back to my beer and conversation. Even the people who were freaking out just got on with it too. When I next looked up the scorpion was gone. God knows where he ended up.
I thought of all that while we bobbed up and down like hopeless plastic ducks stuck far away from where the race was due to take place.
The Mexican guy responsible for spotting the dolphins stood at the front of the boat and began a weird sort of whistle which was no more a dolphin call than the Angelus is. It was just a show for the tourists (like the Angelus).

Suddenly a sea turtle appeared out of nowhere paddling along in front of the boat, and the Mexican guy jumped in on top of him. Neither the turtle nor the nutbag could be seen for what seemed like ages as we watched with open mouths, before the Mexican eventually came back to the surface.
He flopped back into the boat and nobody said a word.
"Fair play," I thought, "at least he's doing something to try kill the boredom."
He retook his position at the front of the boat, wet and pissed off looking, and we bobbed up and down in the ocean once again.

Another sea turtle appeared soon enough, and the lunatic plunged in on top of him too. This time he was back up very quickly however, and he had the sea turtle with him. He'd caught it! A 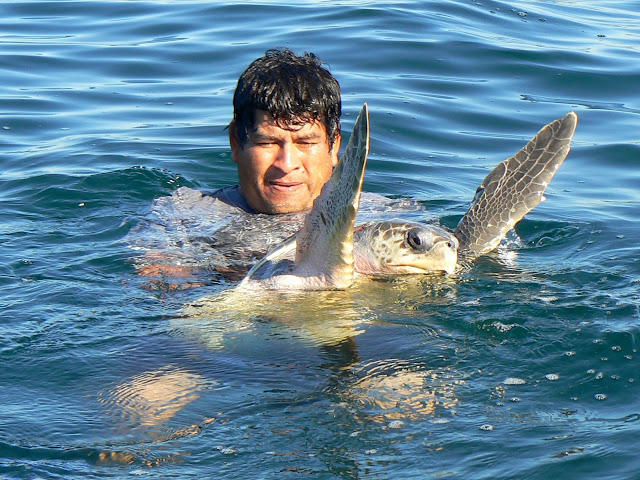 struggle ensued. The particularly pissed off looking beast moved its flippers up and down in an attempt to escape your man's clutches. Both had their faces turned towards us. The Mexican guy frowned as he struggled to keep hold of the beast, and for a while he actually looked like a turtle. The turtle meanwhile had his flippers up in the air as if in surrender but I believe that was just a cunning ploy on his behalf.
The Mexican guy didn't buy it, and he wanted to know if any of us wanted to jump in, so we could swim with the turtle. Our mouths were all still open at the sight of all this carry on, and it took a while for his question to register. "You want us to jump in there with you?"
The turtle kept waving his flippers around in obvious distress, and your man seemed surprised at our hesitation. "¡Ven nadar con la tortuga!" he urged us.
"Ehhh, you're alright there."
He evidently thought we were all mad. Touristas locas. He waited a while for us to change our minds and then reluctantly let the poor creature go. Two flips of his flippers and he was far away from the clutches of the Mexican madman.
Still, he livened up proceedings. Nobody minded that we didn't find any dolphins. They were probably wise to stay away! 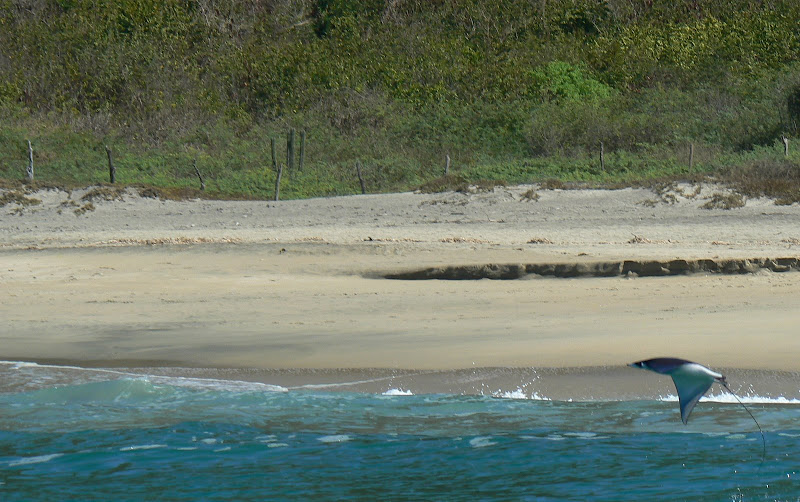