My low opinion of taxi drivers dropped below what I already considered the bottom - it dropped below the bottom yesterday when the fuckers forced me to walk almost two hours in the unforgiving Mexican sun. In flip flops. With all my luggage.

I decided with a heavy heart to leave Mazunte and make my way to Oaxaca. Isn't that a wonderful name? Pronounced Wa-haka. I think if I was ever going to change my name I would change it to Oaxaca. Oaxaca Fahey has a certain ring methinks.
Anyway, I figured with a name like that it's got to be a city of unlimited fun, excitement and diversion. Apparently they eat grasshoppers here covered in chili powder, so I'm looking forward also to crunching into a few of those. 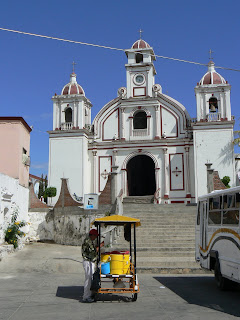 But the taxi drivers. The collectivo dropped me about two miles outside of Pochutla (from where I was to get the bus to Oaxaca), and couldn't bring me any further, because the damn taxi drivers had blocked the highway with their robbing vehicles in some sort of protest. Presumably they feel they aren't robbing enough.
I walked into the town to find out that they had blocked the other side of the town too, and no vehicles, including buses to Oaxaca, could get in or out. I was advised to walk another two kilometres "mas o menos" uphill to the other side of town to see if any buses would be leaving from there.
Not wishing to walk back the way I came, I had no option. Anyway, I walked and walked, with the sun beating down mercilessly, and eventually passed the fuckbag taxi drivers' picket line on the other side of the village. Traffic chaos was on the other side, as trucks, cars, buses and camionetas were stuck with nowhere to go. One guy in particular was doing his nut in as he had two passengers who needed to catch a flight on their way to the airport.

Thankfully I found a minibus going my way. I settled into my seat and relaxed. A group of Italian girls were my only companions. Pretty to look at but very hard on the ear drums. However, that was nothing on the discomfort level compared to when a huge Mexican, the size of two small cows, boarded the bus and squeezed into the two vacant seats beside me. He wheezed and gasped for air, and rivers of sweat poured down his fat face.
The road between Pochutla and Oaxaca is spectacular, passing over mountains, around canyons and through cloud forests en route. We went so high I was almost looking down at the sky in places. The scenery however, necessitates the windiest roads ever built, and the driver (as most drivers in this part of the world are) happened to be a lunatic intent on breaking the mountain speed record, if not the bus itself, as he threw it around every corner with gusto.
We were all thrown around from left to right like rag-dolls. Of course, the incredibly large specimen beside me contributed to the G-forces at work, and he crammed me against the window anytime we took a right turn, which was almost immediately after every left turn when I pushed into him as hard as I could in retaliation.
The odds were against me however, as was your man's bulk, so I was delighted when we finally arrived in Oaxaca some six hours later.
They managed to get your man out of the bus without having to cut him out. All's well that ends well! 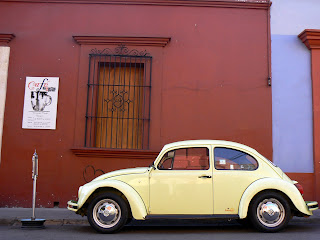