I've witnessed my first sacrifice. A real sacrifice - not like giving up Smarties for lent. Something actually lost its life for reasons of absolutely no benefit to itself. In this case it was an unfortunate chicken.
Yesterday I travelled with to the Tzotzil Mayan village of San Juan Chamula, an incredible place which enjoys autonomous status within Mexico. The locals are fiercely independent, always have been, so no outside police or military force is allowed, and the pre-Hispanic rituals and traditions have been preserved, albeit with some modern innovations. 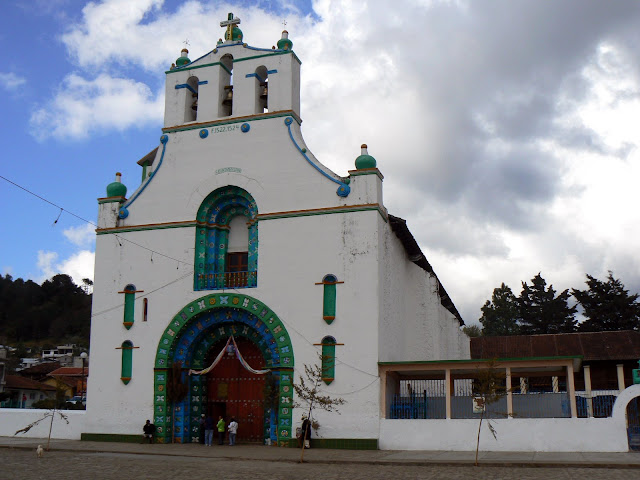 The star attraction is the church, dedicated to San Juan (St. John the Baptist), who is more important to the locals than Christ. They practise a form of Catholicism which is fused with Mayan beliefs and traditions, so it's not like going to any Mass in Ireland!
There are no pews or benches in the church, but the floor is covered with pine needles. As soon as you walk in, thousands of lit candles in rows and rows along the ground assault the eyes. Wooden cases containing figures of the saints line the perimeter. They're all there: San Juan (of course), San Marcos, San Francisco, San Pedro, Santiago et al, but even they must rub their eyes after seeing some of the rituals before them.

Villagers bring bottles of fizzy drinks into the church with them. They kneel in front of the saints and pray in their native Tzotzil tongue. I later learned they use the drinks to burp, believing they are releasing evil spirits from within. They also sometimes pour some on the floor of the church as a sacrifice. Coca Cola is very expensive for the local people, so when they pour it on the floor of the church it is seen as a real sacrifice. The floor was sticky in parts as I walked around. Coke bottles, some empty, others not, lined the edge of the church.

As I was looking at the figure of San Juan himself at the front of the church, I heard a¨"qwawk" behind me. I looked back and saw three old wizened women sitting on the ground in front of lit candles. Dressed in the local traditional dress made of black wool, they really looked like witches.
One of them produced the chicken from a bag while another began a sort of chant. The chicken was a fine specimen, big and white, but its days were sadly numbered. The woman grabbed it by the neck and legs and waved its head over the lit candles. The other, meanwhile, continued her fast chant, words starting in a high tone, then decreasing, before starting high again.
The other put the poor chicken's head on the ground, while holding its legs high up in the air. She appeared to be pulling the head down from the body. She then waved it once again over the candles. Again then, she appeared to be pulling its neck. A couple of feathers flew off. A "qwawk qwawk" confirmed the creature was still alive. It put up a bit of a fight then, flapping its wings and knocking over one of the candles. "Qwawk, qwawk, qwawk!"
The chanting continued. Then the women conversed quietly and laughed, exposing broken yellow teeth as they cackled together.
The chicken was waved over the candles once more, before given another neck-stretching exercise. More feathers floated upwards.
Then the woman put her foot on the poor chicken's head, holding it to the ground, while she forced its legs upward. It remained silent. The chanting stopped. The poor chicken was no more. The woman casually handed it to the principal chanter, and she placed it carefully back in the shopping bag, presumably to be consumed at some feast later on. 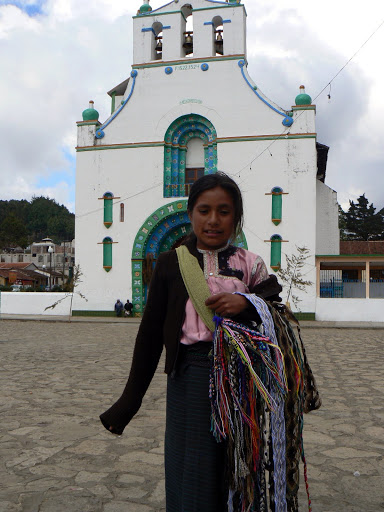 The Tzotzils themselves are a remarkable people. Their independent mindset and fighting spirit provided the bedrock of sentiment necessary for the Zapatista revolution. More on that in the next few days after I learn more...
The kids swarm around tourists selling jewellery and other items of colourful handicrafts. One of them, a little girl about six or seven, insisted on showing me her selection of coloured wristbands. "Por tu chica! Por tu chica!" she insisted. Despite my polite rejections, she persevered. "Por tu chica! Por tu chica!" She then changed tack. "Por tu chico?" she asked, before laughing.
Others joined in the chorus as they swarmed around me. Selling their stuff for half nothing, it makes one wonder haw they survive at all. Of course I ended up with a load of stuff I don't need. Wristbands, a handmade coloured belt, and some sort of pottery dog-thing with remarkably long ears. What the hell am I supposed to do with that? I feel another sacrifice coming up...
Labels: Maya México sacrifice witches Zapatistas