México just gets better and better. I've spent the past three days at Mazunte, a former sea turtle-slaughtering village which has had to adjust to the 1990 ban on turtle hunting. Now the place is full of turtles, looked after and cared for by the villagers, and the happy vibes of love and peace have helped turn this laid-back village into an idyllic paradise on the Pacific coast. 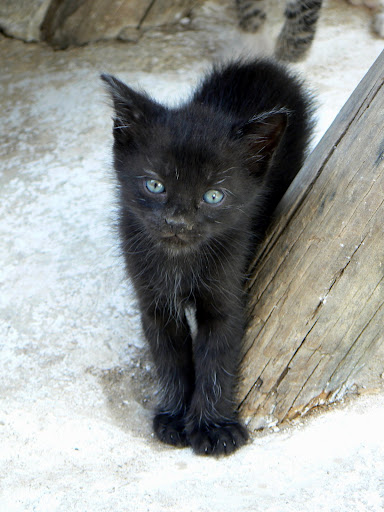 As soon as I arrived I knew I'd be staying longer than anticipated. I checked into Posada del Arquitecto, right on the beach. My sleeping quarters consisted of a hanging mattress from a palapa (hut without walls but with a banana-leaf roof) on top of a hill overlooking the beach and sea. The bed rocked gently with the relievingly cool breeze at night.
During the day one could also chill out in hammocks as colourful birds and other wildlife would pop by to say hello. A friendly little hummingbird greeted me one morning as I was surveying the sheer beauty around me. 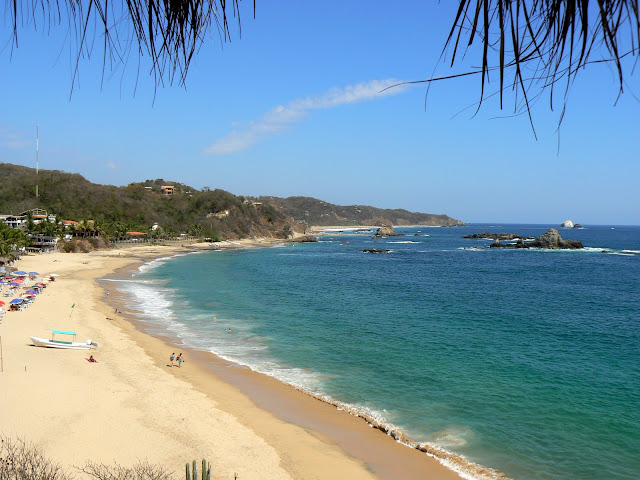 Mazunte's curved beach is simply magnificent. Clean, golden sand is kissed regularly by impressive crashing waves. The water is a wonderful inviting blue, and the hot sun and cool water conspire to entice people in despite the waves' appearance and the possibility of strong currents.
(A Quebecois guy I met the morning I left told me he nearly drowned the day before on another nearby beach, possibly even more spectacular. Just proves one should always treat things of beauty with suspicion. He really thought he was a goner. He could only stagger like a drunk when he finally made it back to shore, exhausted mentally and physically. He was a happy camper, just thankful to be alive!) 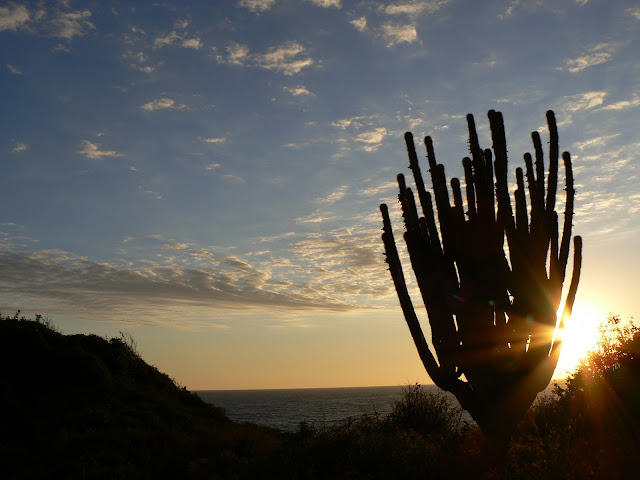 From the Western headland (the most southerly point in the state of Oaxaca), one can witness the most amazing sunsets. We had to climb over rocks by the side of sea to get there but the effort was definitely worth it!
A huge lone cactus acts as a sentinel at the top of the headland, and the sun brings it to life with scarlet and orange shades of warmth as it goes to bed. Clouds high above put on a spectacular red-light show as the sun drops quietly behind the Pacific. (There were no red-light activities down below, at least none that I'm aware of, despite the romantic mood and setting).
Of course, we brought various species of beer with us to help cope with the climb, and to pass the time while observing the show, and plenty of like-minded individuals did the same. The waft of marijuana confirmed the laid back nature of the observers.

Yes, Mazunte really is a special place. I met a very pretty Czech girl on the first day. We ended up going for a candlelit dinner on the beach while flame-throwers put on a show in front. Everything was set up for romance but she wasn't the girl I wanted there at the time.
The next day we were brought on a canoe tour behind a neighbouring beach, La Ventanilla, where we saw wild crocodiles, turtles, iguanas and spectacular birds as we glided through the mangroves. 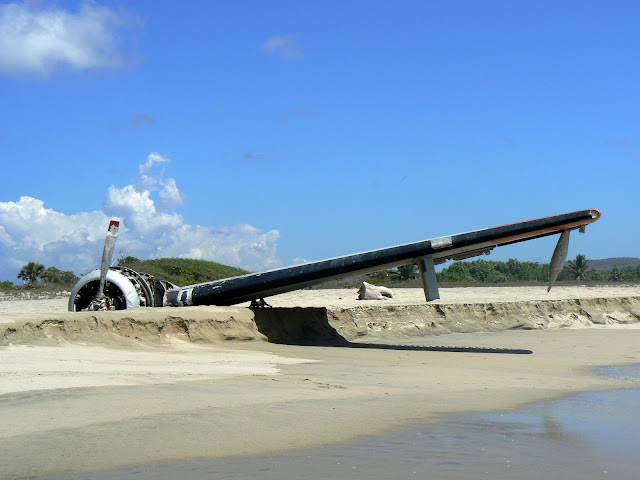 Afterwards we had the whole beach to ourselves, as the soft sand stretched for miles as far as the eye could see. Manta rays leaped up out of the water just off-shore and splashed back with a comforting-sounding slap. Apparently there were just as happy as I was to be in Mexico.
Much further along we found an old plane wreck, left to rust on the beach after if was shot down while on a drug-run from Colombia. Maybe the manta rays had been jumping so they could see it too.
It's amazing how old boring rusted pieces of metal are suddenly fascinating if found on a beach. The plane wreck became an art piece and we spent as long looking at it as one would in a museum, taking pictures and jumping up and down on the wing.
Again though, romance wasn't an option while I wanted someone else there.

The last night turned into a real Mexican fiesta. I ended up knacker drinking from 1.2 litre bottles of the local poison on the beach, while the almost full moon bathed everyone in a soft glow. A local band played wonderfully fast hypnotic music in the bar hgh on stilts just behind us so we really had the best of both worlds. I was joined at the time by a ridiculously nice Australian couple, Ben and Nicky, and another English couple, Daniel and I forget your wan's name. 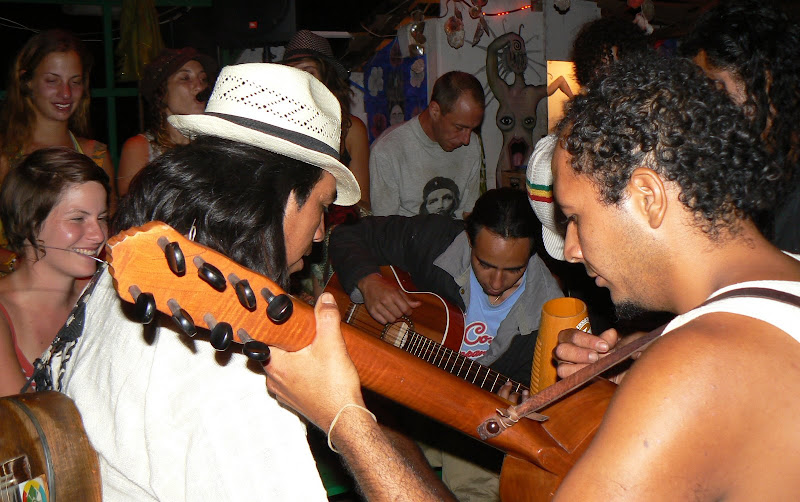 Of course, when we ran out of beer we had to go up and join the fun. ¡Tequila! It was madness. The whole bar was heaving with people and I quickly made more new friends.
One of these was an absolutely stone mad and pissed rough Ost-Berliner, so I was happy to practise my German on him despite his madness/pissedness/roughness. He was delighted when I said "Nay" instead of "Nein" and he called me "Alter" which in turn delighted me. (It´s a sort of Berliner version of "Bud" in Dublin. "Story bud?" becomes "Eh alter" in Berlin.)
He had an unnerving habit of rolling his eyes, drooling and sticking his tongue out like a snake so I didn't talk to him for too long despite the promising start and I went back to my original friends.
The music continued until well after 4 a.m. when just myself and Ben were left standing. I had been up since 6 a.m. the previous morning to look at whales and sea turtles however, so we eventually had to call it a night. We staggered home along the beach in pretty much the same manner as the Quebecois guy must have after he almost drowned.

The next morning I woke up feeling like shit. Hangovers strike even in paradise. I suddenly realised I only had a week left in Mexico, and knew that it was time to hit the road once again.
I met Ben as I was leaving, fairly rough-looking from the night before. "Watch out for bandits on that road," he told me in his lazy relaxing drawl. I figured I wouldn't have to. They'd be looking for me. 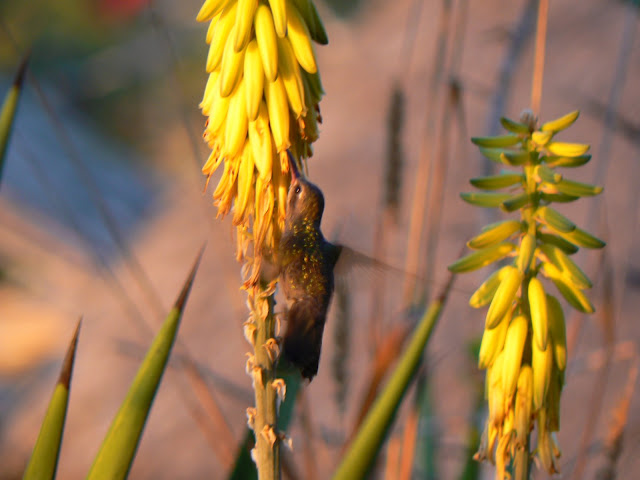