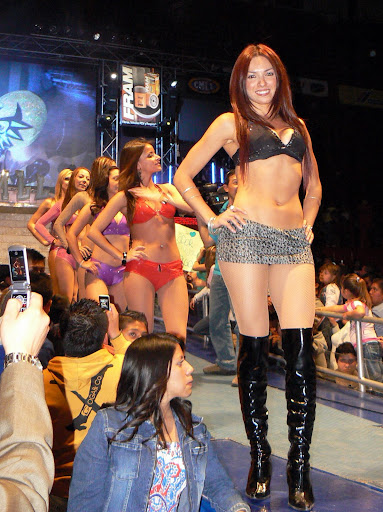 The madness just never ends. It was outrageous. It was wild and wonderful. It was Lucha Libre - Mexican wrestling!

Security wouldn't let me into the 17,000-seater Arena Mexico at first with my camera, but I kicked up a fuss, and eventually Sandra Granados, Relaciones Publicas, very kindly let me in after hearing I was representing Ireland's newspapers. Not only was I let in, but I was granted ringside access to take my photos with the other photographers.

Jesus Christ, What an experience! As soon as I entered the arena the sheer madness of it all hits me. Trumpets blast, the crowd screams and roars, and six masked wrestlers proceed to punch, kick slap, throw, choke and body slam each other with sadistic gusto. And this is the women!
When the main event, the Espectacular Final de Trios, starts, the crowd goes absolutely bananas. Beyond bananas. Six colourfully-masked brutes of men make spectacular noisy entrances into the ring, while being introduced to thunderous applause.
The participants play to the crowd, the two teams of three squaring up to each other, roaring, gesturing and prancing about under the hot bright lights, before the referees finally allow them get at it! 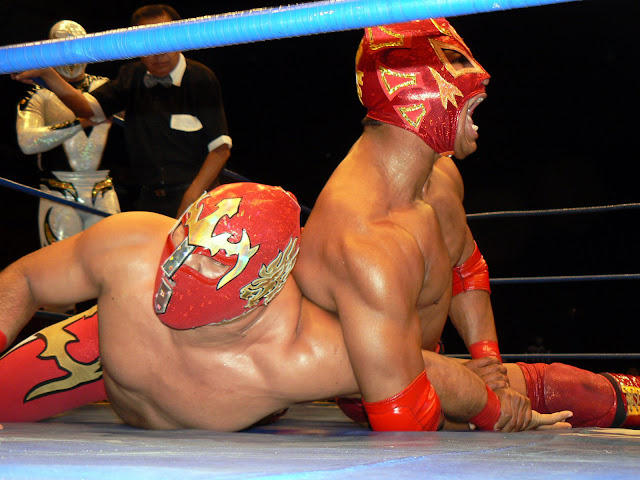 Within seconds they're knocking lumps off each other, flinging each other into the ropes, over the ropes, from the ropes, onto the ring floor, out of the ring floor. The noise is unbelievable! The slaps, the thuds, the groans, yells, screams. It's painful just to watch.
The crowd meanwhile, bays for injuries, cheering, clapping, chanting, shouting, screaming, whistling. They roar approval whenever some poor fecker's flung on his head, thrown out of the ring, or hit so hard he can't get up again. There are laughs too when one slips as he tries climb the ropes.
Meanwhile, I scurry around the ring with my heart in my mouth, trying to take decent photographs, so close to the action I can smell it, reach in and touch it. Bodies fly out at will, and the fighting continues outside the ring, sometimes even in the seats, sending spectators scampering for safely. 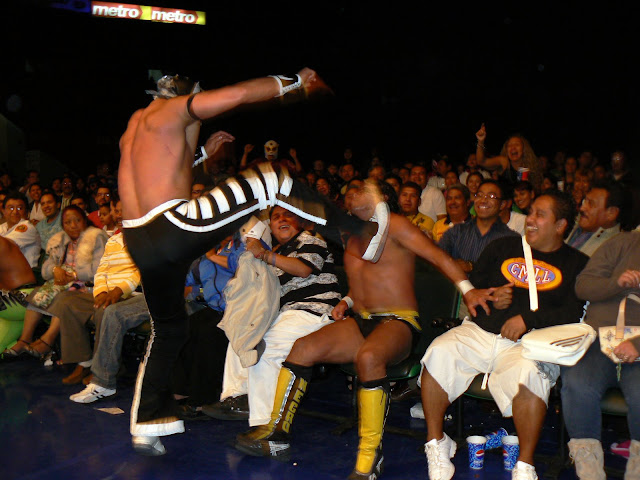 I duck and dive around the ring to avoid injury. You don't want one of those feckers landing on you! One crashes into me however, his knee connecting with my head, knocking me over and sending my camera flying, much to amusement of the crowd behind me, especially the women who laugh hysterically.
The security guys seem more concerned, but are happy once I gave them the thumbs up. There are photos to take!
Seconds after I'm hit, another body is sent flying from the ring. The crowd roars its approval again. The acrobatics continue in the ring. Sweat pours off the wrestlers' bodies. It's then I notice I'm sweating too - from all the running around just trying to avoid being hit! 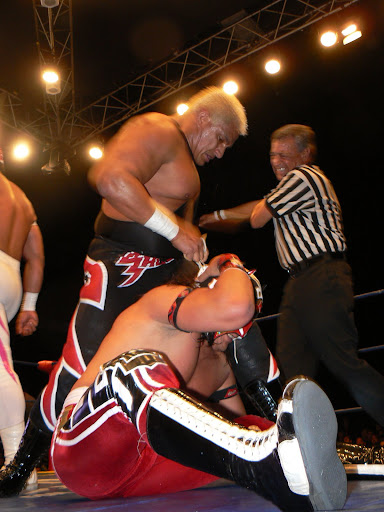 Just when the ring is littered with bodies, the referees start arguing with each other, pushing each other and then arguing with the wrestlers. It all goes out of control. It's mayhem. Everybody's fighting everyone at the same time. Suddenly it's all over. Somebody has won. I've no idea who. Both team captains give rousing emotional speaches. There's talk of a rematch. One stomps off in disgust, while the other leaves to a hero's applause.
The crowd definitely won anyway. Everybody leaves with huge smiles on their faces. The carnival atmosphere continues on the street where takes place a roaring trade in colourful Lucha Libre masks.

(I had been taking a photo of two guys in the crowd when I got hit, and hadn't noticed the wrestler being thrown back into the ring after fighting in the seats. Thankfully the camera survived, but I remained a source of amusement crowd for the rest of the bout. People gave me the thumbs up. Some of them even shook my hand afterwards. Mucho respecto!
In fact the crowd itself was hilarious. Old women, and there were loads of them, would scream abuse at the wrestlers who sometimes came down from the ring and reciprocated with good-natured yelling and posturing of their own, much to the amusement of the rest of the spectators.) 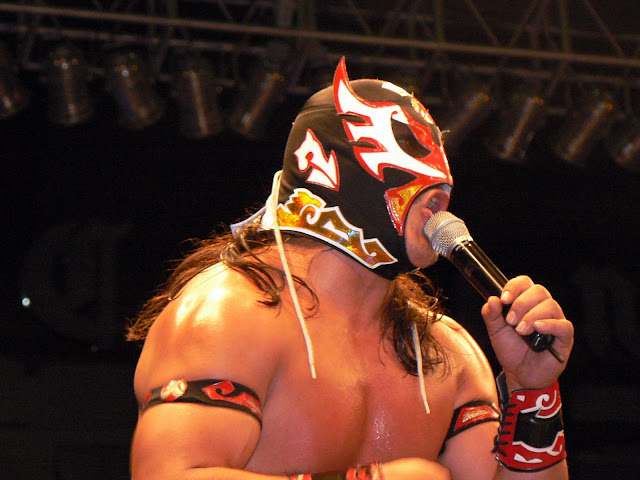 I had been expecting more theatrics than wrestling to be honest, but Lucha Libre is not fake wrestling, or play-acting, it's real! 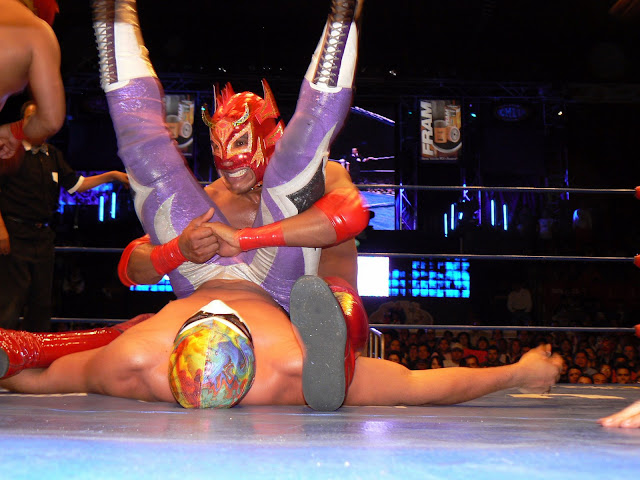