Street salsa, mezcal, fights and fireworks; Noche de Luces was a night to remember!
It started with a bang as fireworks and crackers were sent spinning around the streets, but it almost ended up with us being banged up, as the police attempted to keep us overnight in their hostal behind bars. 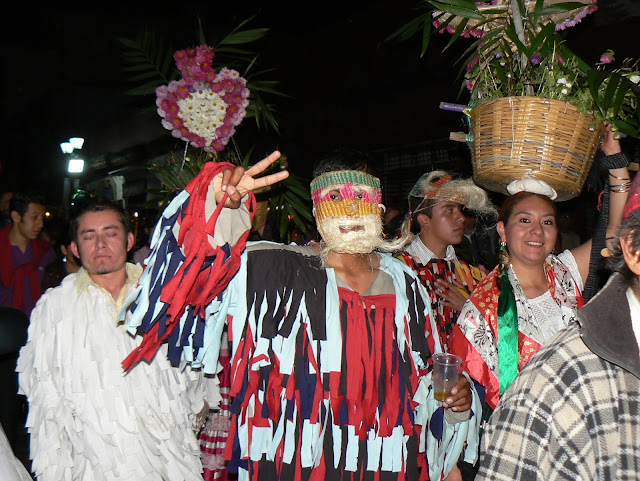 A mariachi band paraded down the main promenade to get the action underway, followed by colourful masked dancers, huge twirling puppets, and a stream of revellers all carrying candles in tulip-shaped stained glass holders. A twirling firework contraption at the head of the band would explode to life every so often, showering onlookers in clouds of sparks while blasting their eardrums.
Of course we joined in behind the band too, as if hypnotised by the trumpets, fire and incredible noise. With faces hidden behind great protruding red and yellow straw masks, and costumes to match, just the eyes of the dancers were visible.
One of them evidently cast their eye on me, and proffered a glass of suspicious looking yellow liquid before my face. "Drink, drink!" he urged me. I smelled it to make sure it wasn't what I thought it could be, (terrible how suspicious one can be). Other dancers gathered around me. "Drink! Drink!" I gulped it down. Mezcal! My friend from the night before. It greeted me warmly as it slid down my throat, and straight away I knew it was going to be a great night.
We paraded all the way down Oaxaca's main thoroughfare, before settling down for the party at the Zocalo, where the dancers really strut their stuff. Hungry for more mezcal however, we wandered off; me, my new friends Pablo from Argentina and Santiago from Colombia, Carola the Argentinian singer (what a name for a singer!), and a couple of American girls. We soon found ourselves in Babel, a tiny smoke-filled den packed to the rafters for a local Oaxacan band. From outside the crammed room, I counted at least seven guitars, a wooden box being pounded by a guy sitting on it, and a couple of other crazy instruments. Eventually we forced ourselves in and took up position sitting crossed-legged on the tiled floor directly in front of the musicians. They took it in turns to sing at the top of their voices while the others strummed/banged along to accompany. Streams of sweat poured down their faces, but the unforgiving crowd screamed and bayed for more anytime their was even a hint they might stop. Each song would last 20 minutes if not more, before we too would bay for more.
Beer, mezcal, mojitos; we tried everything as we took in every note, every strum, every chord, every lyric. And it went on and on. And still we bayed for more.
Eventually we found ourselves back out on the street as the musicians were finally given respite. More music flowed from the door of another bar further on. We went in, but left quickly when they demanded a 60 peso cover charge. About 3 euro. Outrageous.
Back outside on the street, I discovered some beers in my bag. Emergency beers. Well, this was an emergency, so we cracked them open. Soon we were dancing on the street to the expensive music from the bar. The Colombian and Argentinian lads of course were natural and they flung their girls around with gusto. I tried my best. The Argentinian girl took pity on me, and attempted to show me how to salsa. One step two step back, one step two step back. A few twirls, more steps, shoulders, hips. She tried, but I'm definitely not Buenos Aires standard just yet. 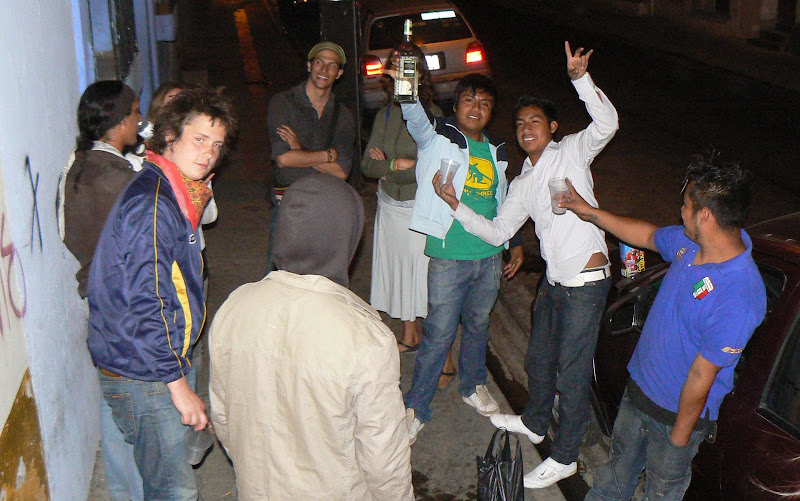 Three Mexican guys meanwhile, were looking at the goings on with open amusement. They laughed when they heard we wouldn't pay for the music upstairs. They disappeared and returned with a bottle of vodka (lemon vodka - crazy Mexicans), grape juice and a load of plastic glasses.
Soon it was a real party, everyone talking at the same time, all laughing and yabbering. Erik from Norway and Viktor from Sweden then showed up, and of course they needed no second invitation to lash into the bottle.
The police needed no invitation either. Driving by on a motorbike, they stopped suddenly when Seren, one of the American girls, was swinging out of the high window bars above the street.
They wanted to bring us all down to the station. Drinking in public is illegal in Mexico, which of course makes it more fun.
These fellas weren't in the mood for fun however. The Mexican guys protested, and we stayed quiet, but the police wanted either 100 pesos from each of us, or we were going with them. After more complaining and haggling, one of the Mexican guys eventually paid them off with 50 pesos and they left us alone. 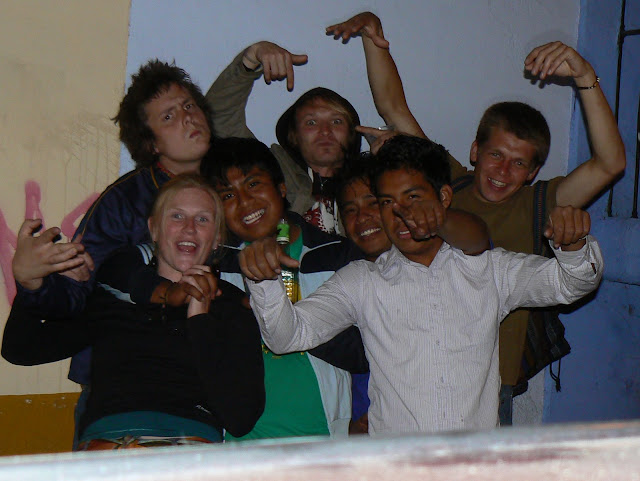 We were still in the mood to party, so we quickly left the scene. The Mexicans invited us to go home with them in a taxi, but I thought it wiser to go Café Central, a neutral venue, and the scene for my introduction to mezcal the night before.
Of course, they had a cover charge too, so we wandered instead to look for El Elephante, a long-opening venue and thus better value per peso.
On the way there, however, all hell was to break loose. A lone hombre made some remark to one of the Mexicans as they were passing. More words were exchanged, until they were shouting at each other across the street.
Then one of our Mexicans hands over the remaining grape juice, takes off his jacket and the three of them all run after the other guy. They catch up with him outside Cafe Central and smash his head off a car. They start hoofing into him then as he lies on the ground. They really hammer the shit out of him. No love at all despite it being Valentine's night. We all look on meanwhile, with open mouths.
Suddenly they're running back towards us, and they turn down a side street just before they reach us. A lone cop follows seconds later, stops in the middle of the road, and radios for assistance.
We don't know what to do, but decide it's wise to leave the area. We cross the next side street over and see two of the lads surrounded by police, while a police van with lights flashing waits beside. Just two of them are there - Juan got away. (I know it shouldn't be funny, but his name actually was Juan - like most things on this trip, you couldn't make it up.)
They stand there with their hands up, look up, see us, and look at us imploringly. But what can we do? We decide it's not worth getting mixed up in the whole affair and start heading home. It was definitely the end of the night. But what a night!
Labels: drunkenness festival fight México Music party police tequila