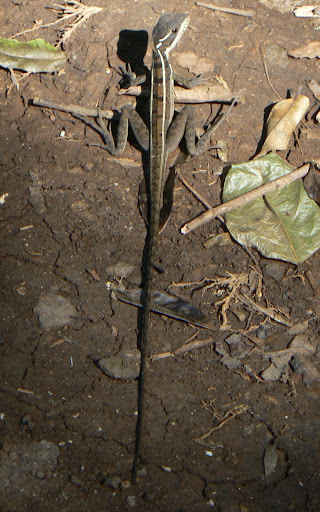 I just learned today there are six species of snake on this island. And it's a pretty small island. Not big enough for all of us methinks.
They told me that at the Iguana Breeding and Research Station, where I've just returned from a personal tour. They also had a tarantula which they had captured there the day before. Apparently, there are loads of them too on the island. Hmmm, maybe time to head back to the mainland. It also turns out those lizards I thought I'd been looking at the past few days are actually iguanas.
More disturbing however, as mentioned before, are the land crabs. On the way way home last night, we noticed millions of the pinchy feckers at the side of the road. Big feckers too. All looking at us with their beady eyes. Itching for a pinch. 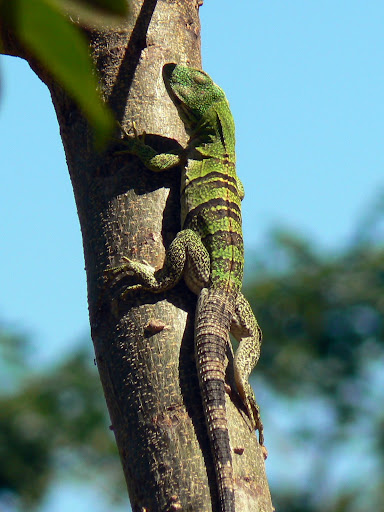 These distractions don't take away from the overall experience however. I now have a few dilemmas to mull over. Firstly is the fact we are on Utila, the cheapest place in the world to learn how to dive. The snorkeling has given me a taste for it. To get internationally recognised diving certification costs $259 here, a fraction of what it would cost in Europe or elsewhere. It's a four day course with two deep dives at the end. I'm not sure I would make use of it again however. Berlin's pretty far from the sea, and there are no coral reefs in the Baltic. Too damn cold.

The next thing to consider is whether I'll go back at all. I mean, I will go back, but maybe not when I'm supposed to. I'm supposed to start work on February 2nd, but I haven't had confirmation of that since November. Maybe I don't want confirmation. Now that I'm actually on this side of the world, it seems a shame to be so hasty in heading back. It also seems to be another case of work getting in the way of living, although my finances keep protesting otherwise. Anyway, still a few weeks of living to be done either way. No need to make any snappy decisions, although México's call is getting louder by the day...
Labels: Carribean crabs Honduras iguana lizard México snakes snorkel Utila