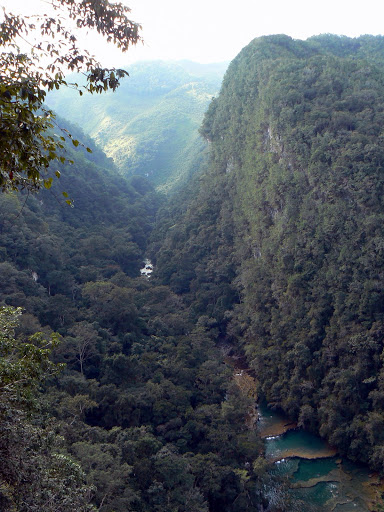 Semuc Champey is quite possibly the most beautiful place I've been. The stage was set on Tuesday night. After a minivan journey of almost nine hours from Flores, (after being told it would take five and a half hours), we arrived tired and pissed off.
I tried to catch the last of the sunlight, so after dumping the bags in the hostel, I took a stroll up the to site of a wondrous natural wonder carved over millennia from the limestone rocks. So I'd heard anyway - by the time I got up there it was dark and I couldn't see I thing.
I was greeted by two security guards wielding machine guns. (You're no one without a gun in this country.) "¿Es abierto?" I enquired.. They seemed surprised but welcomed me none the less. One pointed me in the direction I should take - down a series of steps with a stone wall in either side. At the bottom was darkness. "Okay," I thought, "I'll just wander down, have a quick scoot around, and then head home."
Halfway down, I realised one of the armed guards as following behind me. A bit disconcerting to say the least. I wondered how many people were the recipients of unexpected bullets in the back of the head in Guatemala in the recent years, never mind the civil war.
Once I got to the bottom, only to reveal even more darkness, I thought I should confront him. At least face him in case he got any ideas. I noted the moonshine reflecting from the barrel of his gun. 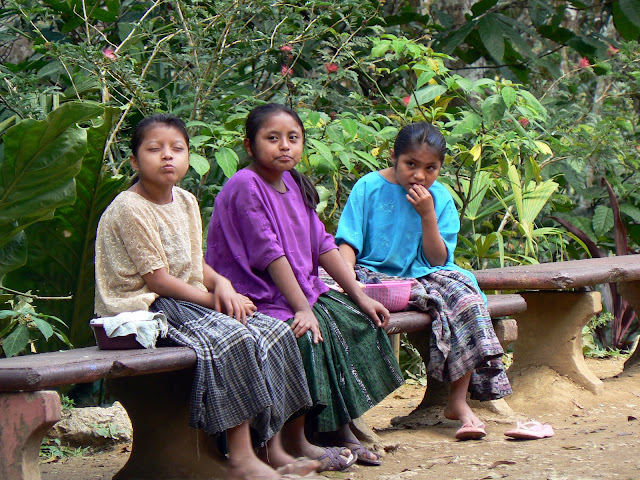 Thankfully he was just there for my protection. (A lot of tourists had been victims at this spot before.) In terrible Spanish I somehow managed to convey to him that it was quite silly of me to wander up to arguably Guatemala's most beautiful spot in the middle of the night, and that I would return instead the following day. In daylight. So I could see it. He seemed to agree with my logic, but not before he tried to convince me to stay a bit longer.
On the way home, I could see the jagged peaks of the surrounding mountains, and I could hear the whoosh of the river beside me. Holas greeted me from the side of the road from friendly locals, invisible in the dark. One little kid appeared out of nowhere and tried to sell me some chocolate.
Further down the road, it became magical. As the river gurgled along merrily, and crickets and tree frogs accompanied with clicks and more austere tones, glow worms lit up intermittently, like tiny lighthouses in a sea of darkness.
I made it home unscathed, but wow, I couldn't wait to see Semuc Champey in daylight! 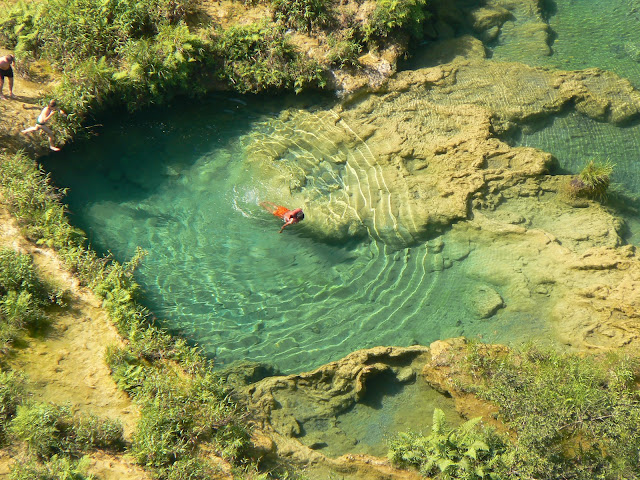 The next day the beauty hidden by the darkness was revealed. It was stunning! Crystal clear water in pools cradled by marvelous limestone formations trickled into each other, each a different shade of turquoise or green from the rest. We swam in various pools, as friendly fish nibbled their greetings anytime we stopped paddling. Mountains soared from the waters' edges, covered in trees and vegetation. A hike to the top of one revealed a magnificent vista below. Truly worth seeing during the day! 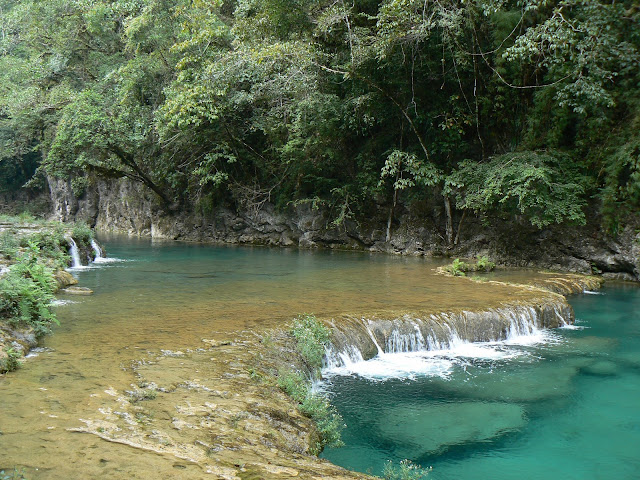