I've just spent almost an hour typing the latest account of my travels but this fucking computer lost the whole lot. The auto save on this damn site is so bloody efficient it saved the latest version - the one with everything already lost.
Needless to say, it was the funniest, most informative, engaging piece of writing I've ever done. Now it´s been lost in cyberspace, never to be read by human eyes, and I'm going to smash up this shitty computer...

Okay - I just got a coffee there. Time to calm down... 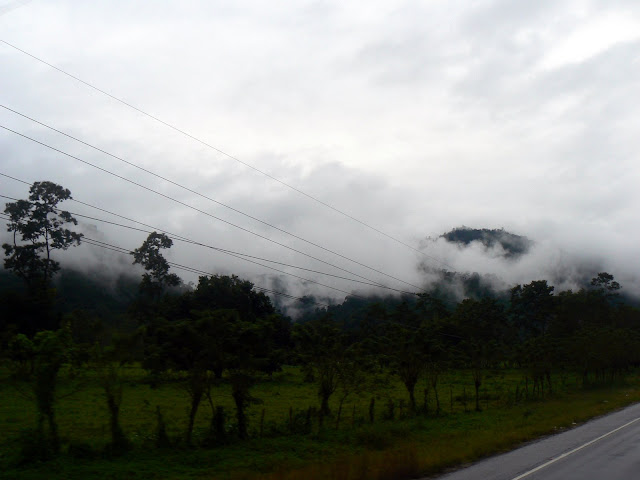 Basically, all I wanted to say is that we've finally arrived in Río Dulce, Guatemala, some 27 hours after leaving El Pino, Honduras. We made it by two collectivos, a directo (which was anything but direct), one taxi, a chicken bus, and a lift from a woman in a pick-up who must have been the Road Runner in a previous life. She drove like the devil was after her, beeping at everything in her path (and also everything off her path). Beep beep! Beep beep!
At times she was literally struck dumb by road rage. She would throw her hands up and down, gesturing frantically, her face contorted, her lips moving, although no sound could escape. In between fits of road rage she was very nice. We stopped to drink green cocos en route, and she refused to take money from us when she mercifully left us off at San Pedro Sula before continuing on her way.
The guy who drove us this morning was even worse. He also overtook everything in his path. He even overtook when he had to pull in ahead to pick up more passengers, slamming on the brakes ahead of the trucks he just overtook to pick them up. Then he would overtake them again! Whether traffic was approaching or not didn´t seem to concern him.
At one stage there were 25 people in this Hiace-sized van. It might even have been a Hiace. The tear that had been in my eye on leaving Honduras was replaced by someone's elbow, but at least we've finally made it here with all limbs intact. It was touch and go there for a while!
Labels: bus Guatemala Honduras