Despite being in Copán three days now, we still haven't seen the famous Mayan ruins nearby. We actually walked there on New Year's Eve, but neither of us brought enough money to actually pay in. Instead we walked around in the jungle nearby, and stumbled upon some other less-impressive (one has to presume) ruins.
We circled the main ruins with the intention of breaking in, but the feckers had installed a damn good fence to keep gringos like us out. Still, the walk and the scenery were beautiful and not without a sense of danger - increasingly important I'm beginning to learn. 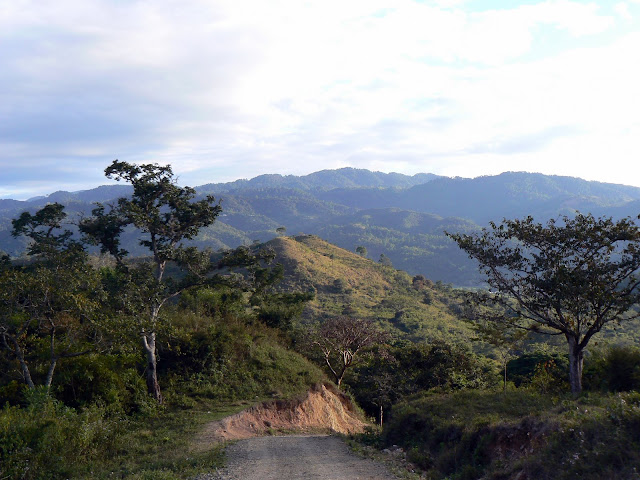 Yesterday I went for a hike in the mountains to the north of Copán while Jenny went horse-riding. (I don't trust the four-legged feckers.) Again, most of the danger was in my head and the trek passed without incident.
On the way up however, every rustle in the grass was a poisonous snake or a scorpion, every movement in the bushes was a jaguar about to pounce, and vultures circled with intent high in the air above me. Tarantulas lurked under every rock.
Making my way up a steep and narrow trail, a few miles from Copán, and nowhere near any houses, I suddenly noticed three men with rifles a distance behind me. I checked again a couple of minutes later and they were no longer there, but suddenly, another minute later, they were there again, much closer this time. I probably ascended even quicker without realising, but the men were gaining on me all the time. I forgot about the jaguars, tarantulas and snakes as the three approached ever closer. I realised I couldn't outrun them up the mountain in the heat, so I decided to wait. They probably wouldn't shoot me I figured. Just give them what little money I had and they would be happy enough.
As they approached however, I suddenly felt very foolish. The armed bandits were suddenly unarmed. No guns. They were just three rancheros on their way home after a day's work.
"Hola," I offered sheepishly. They replied with grunts, nods and whistles. (They seem to whistle a lot here.) They continued on their way past me and disappeared up the mountain.
I was on my own again. Even the jaguars, snakes and tarantulas deserted me. The vultures, I realised, were never there either. There were just mountains, trees and rocks. Spectacular but not life-threatening - the way most people would like it.
Labels: Copán fear hike Honduras Ruins snakes vultures