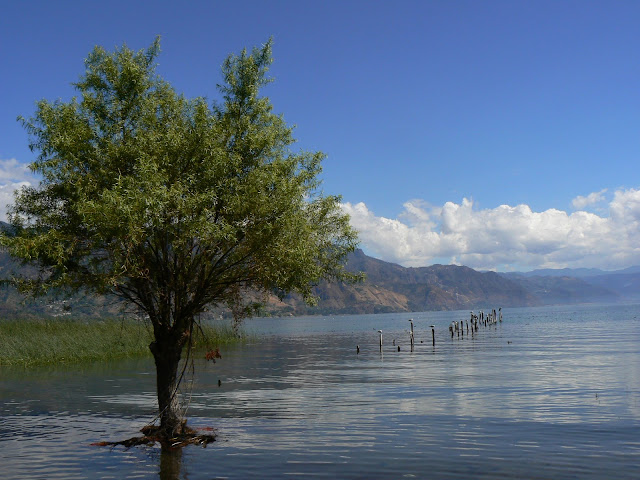 San Pedro La Laguna, on the shores of Lago de Atitlán, is a strange place. It faces the tranquil silver-surfaced waters of this beautiful lake and turns its back on the menacing 3,020 metre Volcán San Pedro looming immediately behind it.
I've been assured there is no danger of this beast erupting but even still, it feels as if the villagers are adopting an ostrich approach.

Certainly life goes on here as it would in any other traditional Mayan village. Coffee beans are dried along the roadside. (They actually stink!) Colourfully-attired women in traditional dress sit at the market surrounded by baskets of their wares: avocados, melons, tomatoes, mangoes and other mad fruits which seem to do their best to rival the colour of the dresses.
Little kids help out too. The hardship of living in the country and eking out a meagre existence ensures that it's all hands on deck for family members.
In fact it's stunning how hard the children seem to have to work here. Little boys lug boxes of stuff around while little girls are already hard-nosed businesswomen. Today I bought three bananas and three oranges from a girl at the market who couldn't have been more than 9 or 10. Five Quetzales for the lot (50 cent). She may have been ripping me off but I wasn't going to start haggling with her. 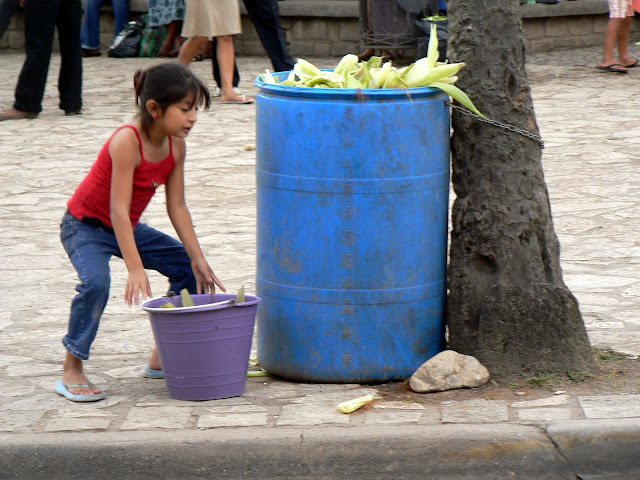 Apart from the Mayan villagers, San Pedro is home to what seems an inappropriate number of scruffy, long-haired smelly gringos. These hippie-wannabees are found in many of the village's cheap hangouts, slouched over couches or reclining in hammocks without a care in the world.
They justify their existence with long lost romantic notions of freedom, fighting the system and corruption. In reality though, like the San Francisco hippies, they're typically stoned, unwashed and too lazy to even describe themselves as wasters.
The only thing they fight for is the sense of inequality which permeates throughout the village. Really, the contrast between the natives who labour and toil for everything they've got (which isn't much), and the "blow"-ins couldn't be more pronounced.
Labels: Guatemala hippies Lago de Atitlán Maya volcano