Guns definitely rule the roost here - also in Guatemala. Copán still has the feel of a frontier town - probably because it's near the frontier but nevertheless... Most of the men walking the cobbled and tattered streets are rancheros, strutting around in their distinctive white cowboy hats. 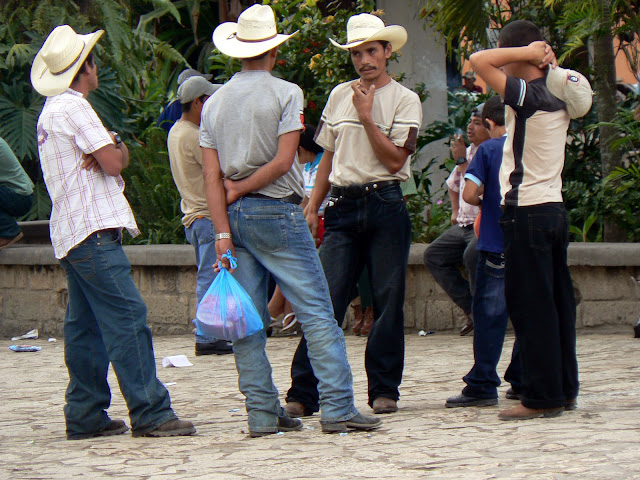 It's the kind of place a couple of Yankee gun-toting adventurers might once have ridden into after a couple of misdemeanors, as they fled south to escape the long arm of the law.
One could imagine Robert Redford and Paul Newman riding into town, and deciding Honduras could be a comfortable place to lie low for a while. They might even have cast an envious eye at the local banks.
All of them are guarded by armed security guards, two to each door, and all proud of their status. To be honest however, I think even I could take them out. They seem to be a bit past their prime, big bellies betraying their level of comfort. They all have the uniform moustache, beady eyes, and the dark hats of authority, and while they scan all around them with suspicious eyes, I get the feeling they wouldn´t really have the heart for a fight. If they were called to business.
One of them, a particularly large fellow, has a habit of taking up the whole pavement with his outstretched rifle. Twice now he has had to move his rifle out of my way so I could walk past.
I can't help thinking I could easily grab it from his arms, pop a few slugs into his fat belly, and that of his compadre, and hold up the bank. It sure would beat having to work for a living.
Instead however, I just smile politely at him. He smiles back, unaware of my thoughts. He's lucky. If he wasn't so damn polite... 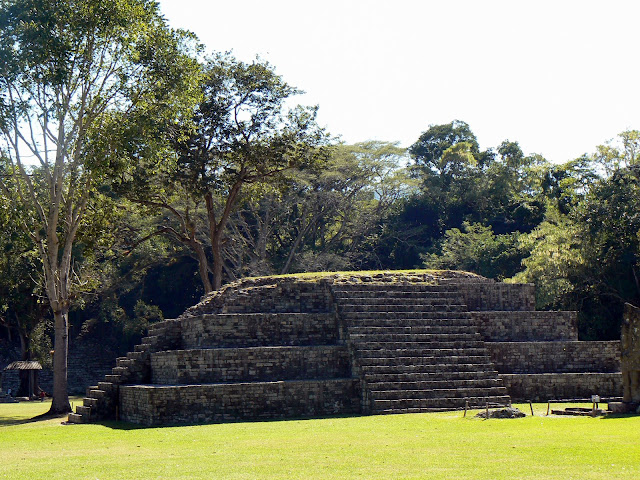 Interesting enough, but for me not worth the entrance fee. ($15 each.) We should have bought a wire cutters and made our way in through the fence like I suggested.
The ruins go back to the time when the Mayans used to sacrifice each other to the gods from pyramidic temples. Unfortunately the shows were all long over by the time we got there, (It had been a thousand years or so since the last one apparently - talk about being too late), and there were only the sculptures and remains of the once alleged great civilisation left from which one could imagine the carry on at the time.
Apparently the temples of Tikal, in Guatemala, are much grander and impressive. Once I knew that, the ruins of Copán didn't stand a chance. I mean, who wants to go see the second best Mayan ruins in Mesoamérica?

Tomorrow we begin our journey towards the Bay Islands in the Caribbean (at 7am!). I'm sure the early start will be worth it.
Labels: Copán Guatemala guns Honduras Maya Mesoamérica Ruins Tikal