As soon as I decided to stay it became an adventure. At the airport I had just 40 Quetzales left (about €4), insufficient to get me back to Antigua on the shuttle bus. None of the airport's ATMs were working - one of them was missing a keyboard and screen. I presume they were stolen.
Instead I had to take public transport into Guatemala City's centre and somehow find where the chicken buses for Antigua left from. It wasn't an enticing proposition. My guidebook is apocalyptic when it comes to warnings about venturing into the city, never mind using its public buses which, it informed me, are known for "robberies, assaults and sometimes even murder".
The bus arrived with two armed guards on board. Two! One behind the driver and the other at the back of the bus. It didn't necessarily make me feel any safer. I had tried to memorise the street numbers I needed to look out for en route, but the sight of two pubescents clutching rifles occupied all my attention. (No one else seemed to mind. Two businessmen in suits were happily yakking away beside one of them.) 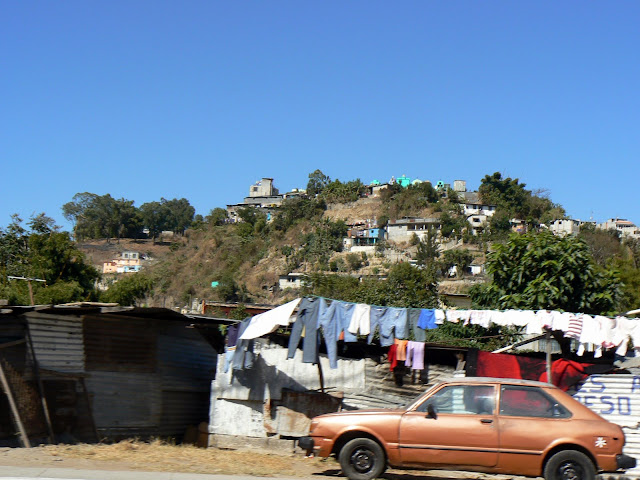 Guatemala City is a dump. An incredible filthy dump. It's surrounded on three sides by shanty towns, and the centre isn't that many steps up in appearance. Traffic chokes the streets in all directions. Chicken buses and trucks belch black fumes on top of everyone else. Radios blare. Advertising signs, car horns and hawkers all vie for attention. It really is an overwhelming assault on the senses.
In fact, it seemed to get worse as I got closer and then further into the city's lair. Buildings became more dilapidated, people more threatening looking. Even the dogs which lie on the streets of towns all over Guatemala were nowhere to be seen in its capital - they have more sense.
The gun-wielding kids were soon forgotten as I realised I had to actually get off the bus to find my chicken bus to Antigua. I found myself in Zona 1, but knew I had to make my way to Zona 7, some distance to the west. I walked purposely in the general direction I thought it would be, trying to appear bored and unconcerned, and definitely not lost.

My eyes couldn't help themselves however - they took everything in. Every shop I walked by had at least one armed guard. Mad stuff. Piss stained the pavements and most corners black. Everyone bustled, (presumably like me so they wouldn't be shot, stabbed or robbed),
It was a most unpleasant, foul-smelling but fascinating walk.
Meanwhile I hadn't a clue where I was going, but I couldn't take out my guidebook for fear someone would notice. (I didn't dare attempt take money out for the same reason.) I walked and walked and walked, maintaining a steady gait.
Eventually I stopped in a café to get my bearings. (Also a fine breakfast of scrambled egg, fried beans, fried bananas, chili sauce, nachos, a sugar coated bread thing and coffee for 17 Quetzales.)
The kind people in this wonderful sanctuary of a café told me I'd have to get another chicken bus to the terminal for Antigua. I jumped on. Of course I got off at the wrong stop. More wandering around dusty streets and piss-stained paths. Every chicken bus I saw quickened my heartbeat, but hopes were dashed as none were going my way.
Eventually I just took out my paranoia-inducing guidebook and looked up the map. At least I was walking in the right direction. I kept going and going, each step bringing me closer to the promise of safety.
At last I heard a wonderful sound: "¡Tigua, Tigua, Tiguaaa!"
My bus!
"¿Antigua?" enquired a guy running up to me.
"¡Si, si!" I replied. I could have hugged him. I was going home.
Labels: Bandito bus fear Guatemala guns shady shit