The sun is back! We left the rain and gloom of Río Dulce and made it unscathed to Flores, a pretty tourist town set on an island in the middle of a large lake. The star attraction is Tikal, an hour and a half away, but more on that later...

The bus to Flores was an experience in itself. Six hours due north. The bus driver, for once, was actually sane, although that didn't prevent him using his TWO mobile phones while driving, or scoffing a plate of tortillas and chicken with one hand on the steering wheel.
To be honest I couldn´t blame him. This great big woman got on the bus an hour after we left, with a huge blue plastic clothes basket crammed with food.
"Pollo, pescado, res, chuletas, tortillas, arroz, verduras, comidas!" she cried out. She had everything - 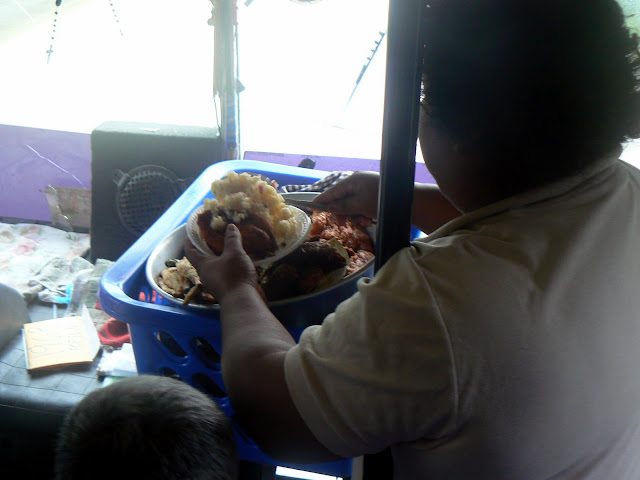 Chicken, fried fish, minced beef, chops, tortillas, rice, vegetables etc. and the smell was amazing!
Suddenly the bus (which was jammed with people, I was standing at the top at the time,) became a restaurant, with the "diners" all placing their orders for meals which were served on plates. A little kid, presumably this woman's son, ran around selling cans of orange, coke and the like.
Everybody bought something, starting with the bus driver at the top. When the woman served the top half of the bus, she perched the basket on her head, and squeezed her way down the aisle to appease the other hungry passengers. Soon everyone was munching on the most delicious-smelling plates of food. Young and old stuffing their faces. Nobody talked. Eating.

I was actually happy the bus driver was stuffing his face too. (He got some mighty tempting-looking tortillas.) It meant he had to slow down just a bit, and give the overtaking a break for just a few moments. Definitely the most comfortable journey so far...
Labels: bus food Guatemala