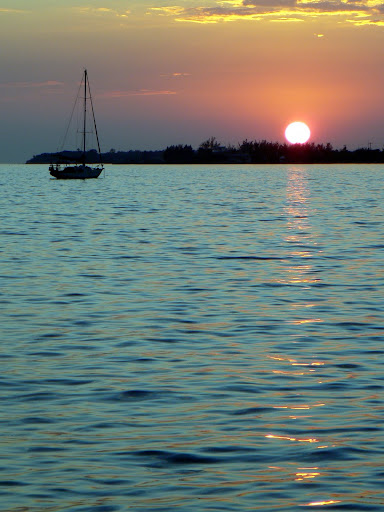 The lack of posts in recent days can be explained by one simple sentence - I'm on a Caribbean island! Utila, Honduras to be precise. We've been here three days now, arriving on Saturday after a mammoth 12 hours journey which culminated in a three hour sailing, the choppiest experience of my life despite the lack of pork.

The island itself is as one would expect a Caribbean island to be - palm trees, white sand, clear warm waters. It's what's in the water however, that's spectacular. These islands have the fortune to be flanked by the second largest coral reef in the world, so on Sunday we went snorkeling, something I'd never done in my life before. It was amazing! Jesus Christ, I was literally swimming with the fishes - thankfully without the mafia consequences. The colours, shapes, sizes, and variety of the marine life just a few metres under the surface is astounding, and simply just to float/swim above this wonderful world was an unforgettable experience. Words can't do it justice, and I don't have any pictures to post due my my lack of ownership of an underwater camera, so I guess you'll just have to trust me. 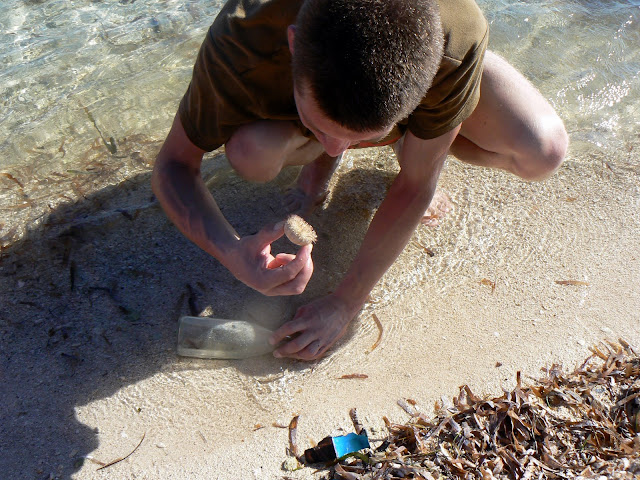 Anyway, we went snorkeling again yesterday, and the sights were, if anything, even more impressive. We saw some triangley poisonous fish, as well as come clown of a fish with big eyes and a weird nose kitted out in all the rainbow's colours.
We also went sea-kayaking, but that didn't exactly go according to plan. Wind and waves conspired to lead us rapidly off-course, causing us to abandon plans for sailing to the other side of the island through mangroves to check out turtles or whatever is on the other side.
Instead I found a sea urchin which captured my attention for what I realise now was an inappropriately long time. They're known as sea hedgehogs in German, so for the poor fecker who was being examined by yours truly for so long, it must have been like looking in a mirror.


Unfortunately, due to my enthusiasm for the Caribbean sun, I've taken on the common hue of the Irish species once it occasionally migrates south - Lobster. From here it will either be nutty brown or beetroot. I'm hopeful it will be the former but time will tell. 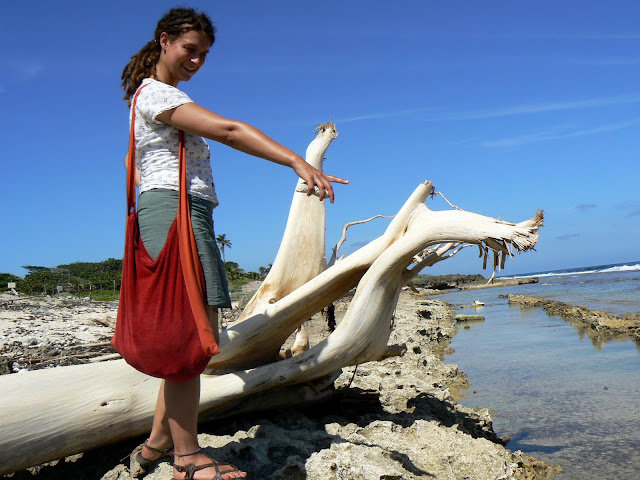 Today we hiked to the other side of the island. I had company today so paranoia didn't tag along as on the last hike. It was quite relaxing I must say. We encountered a squillion lizards and butterflies en route, before finding ourselves once again on the northern seashore. Jenny was as happy as a seahorse, collecting old coral rock formations, or fossils, (to be honest I'm not sure what they are, but they're pretty in any case). After spending an eternity grappling with the heartbreaking decisions on which to take and which to abandon, (and eventually taking most anyway), she frolicked in the waves awhile before emerging with even more coral.
We later hiked up Pumpkin Hill, the highest point of the island at a lofty 74 metres, in flip-flops. Meanwhile my recently-purchased hiking boots lay neglected at home.

Today we booked our place to go swimming with whale sharks on Friday. Whale sharks! The biggest goddamn fish in the world!! Another opportunity to snorkel. Isn't snorkel a great word? Snorkel. I love saying that. Apparently the German for snorkel is schnorchel. Even funnier. That language gives me no end of laughs.

Despite being on a Caribbean island, life can have it travails. This evening for example, I had to shave with just a blade. 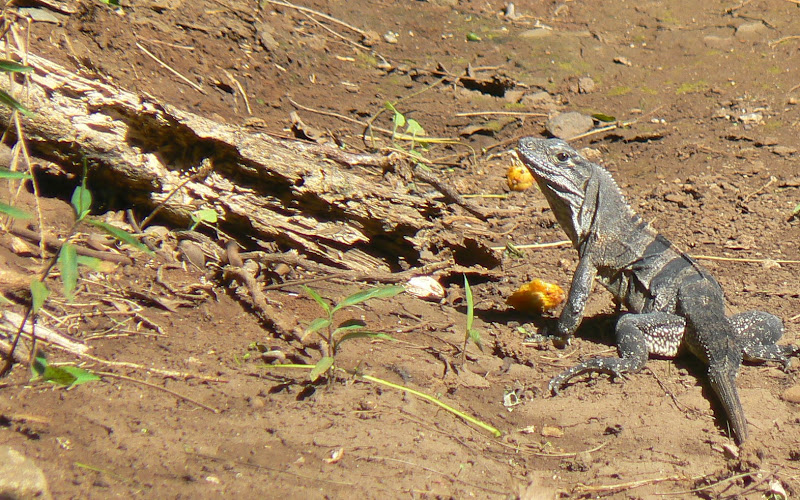 The handle on my Mach 3 supersonic device broke because all the shit in my bag was packed too tightly. I guess it just shows that life's hardships will always track you down, even in the Caribbean. I know, woe is me!!
Maybe however, it explains why the locals seems to be constantly shouting and arguing with each other. Seriously, they're in danger of wrecking the vibe man. As for the fuckers on the motorbikes going up and down the only "road" on the island, Jaysus. The road is also a path, about three metres wide, and some of them actually beep at you as they come from behind. I suppose you're meant to fling yourself off the road into the sea so they can zoom past... I tell ya, the next fella who beeps at me will be getting a stick in the eye.

The only other slightly off-putting thing is the number of cockroaches I've encountered so far. Two met with untimely ends yesterday thanks to my under-appreciated flip-flop. Apparently, they can fly too, which makes them even worse. I just don't like them - much like the people sitting beside me right now.
But those cockroaches can be cheeky buggers. While on the Honduran mainland last week, we were cooking dinner. I opened the kitchen door to get something outside, when this little fecker can scurrying in by my feet and under the kitchen table. I don't know which was more disturbing - the fact I couldn't then find him, or that Jenny christened him "Cocky".

Right, time to go. Apparently the people running this interweb joint wanna go home. I haven't mentioned the land crabs yet though - they're everywhere! But more on them next time.
Now, I just have to find a stick...
Labels: Carribean cockroaches coral reef fish German hike Honduras snorkel Utila