I'm sorry to report Río Dulce was crap. It rained non-stop apart from a half-hour window when we were lucky enough to get out on the lake in canoes. Then the rain started again, with a vengeance, as previously reported in the last post.

I blame the Swiss. They can be blamed for most of the world's ills, and our shit time in Rio Dulce was no exception. The place we stayed was a jungle lodge on stilts-type affair, run by two Swiss guys. One of them was a wannabe Bavarian beer-swilling, Lederhosen-wearing, pompous ass. He so wanted to be German he had the most god-awful German singalong folk songs from the 80s on the stereo, (even poor Jenny was cringing), while he "danced" on his own in front of the bar, swaying back and forth, oblivious to the stares and groans from his embarrassed guests.
Yaw yaw was his answer to everything. When I asked him the next morning if he heard the weather forecast, if there was going to be any letup in the rain, he answered: "Yaw, yaw. Rain will stop." The lying sack of shite. 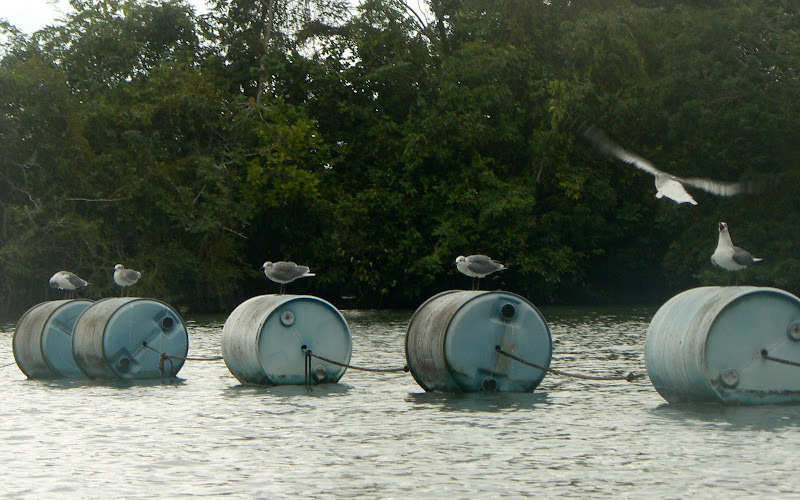 Every raindrop which hit my head, and there were a lot, was another dagger in the neck of the admittedly small esteem I had held for the Swiss. Now I think they could even be worse than the Bavarians and the Austrians.
The neutral, money-grabbing leeches. Even their cheese has holes in it - probably syphoned off to line the vaults of their bank accounts. Neutrality only maximises their appeal to all the crooks of the world. Money is more important than principal. They also invented clocks so the rest of the world could get up each day to work. They just collect the ill-gotten gains.
Even in the lodge, which cost us a hefty 120 Quetzales per night (€12), there was a warning that every HOUR extra would be charged at another 50. Only the Swiss could come up with something like that.

So you've been warned. If you ever find yourself in Río Dulce, Guatemala, don't ever stay with the Swiss.
Labels: Guatemala Lederhosen rain Switzerland