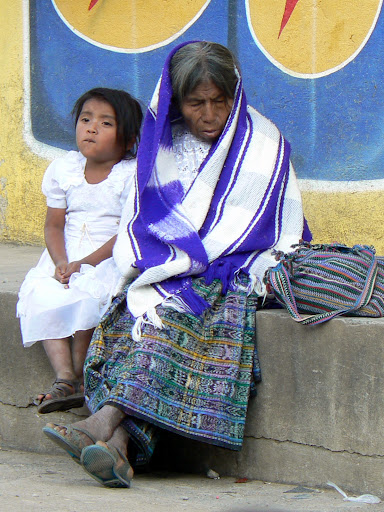 After Semuc Champey we made our way along the windiest, bumpiest "road" 10 km away to Lanquín, a pretty local Mayan village set in the most spectacular mountain setting one could imagine.
Spanish isn't the language of choice here, rather Q’eqchi’. The locals would either greet you with a smile full of teeth, or simply with a look of unabashed curiosity, gawking without shame. Hundreds of little kids ran around the dusty, bumpy streets, while the older generation simply sat or stood around watching the commotion around them, particularly the commotion caused when a bus or minivan arrived and the destinations were announced. "Cobán, Cobán!" or "Semuc, Semuc". (No buses have their destinations marked. Fare collectors hang precariously from moving vehicles shouting out the final destination and urging would be passengers to hop on. Room is always made, either in the bus or on it.).
Dogs meanwhile, some of the mangiest I've ever seen, simply lie around indiscriminately, whether on the road or not. casually ignoring everything around them, unless a passing vehicle strays too close for comfort - but that has to be VERY close.)

Visitors are made feel very welcome in Lanquín. After checking in to El Retiro, a hostel in the valley where guests are housed in private wooden huts on stilts beside the fast flowing rio, we noted that the nearby restaurant advertised "Schnitzel food". Naturally we ate there that night. It was so good in fact we went there again the next night, although I didn't try their famous "schnitzels" which were made from chicken. 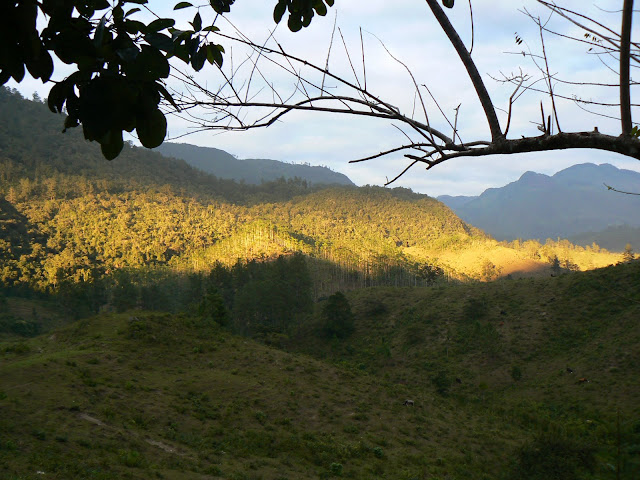 The chief attraction of Lanquín however, is not the schnitzels but the limestone caves, carved in much the same way as the aforementioned Semuc Champey. They go on for hundreds of kilometres below the surface. Weird and wondrous fantastical formations are carved on pillars, stalactites and stalagmites. Visitors can decide for themselves how to interpret the scenes. Nature´s modern art I guess.
Care is needed however. We spent most of the time slipping and sliding on the rocks and muck beneath or feet. At times I literally had to hold onto stalagmites (or stalactites, I´m not sure which) for balance and support as I tried clamour over rocks, taking care not to slip or drop the damn camera into the darkness below. It was great though, especially as we had the caves all to ourselves. Although not quite... 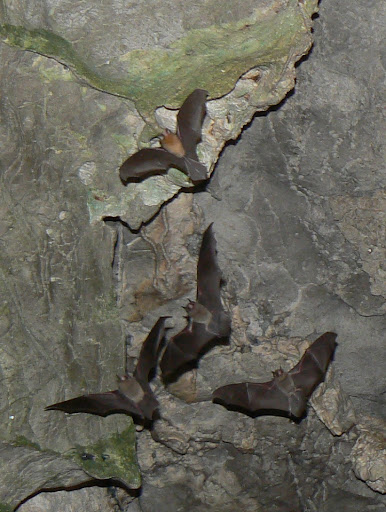 The caves are home to thousands if not millions of bats. So the real show began later, at dusk. As soon as the sun starts getting sleepy, they make their way out of the cave in droves. Clouds of bats zoom out of the caves' entrance over the river, as the furry fliers make their way out to feast on insect life outside.
I stood at the entrance. Like a bouncer, but there was no way I was stopping anything going in or out. Firstly a few stray bats zipped in and around the trees and river. The small numbers quickly multiplied as it got darker, and soon I was looking at a blur of action, as the winged mammals flapped their way like darts in and out of the caves. It was literally like watching smoke leaving a chimney. A never ending stream of bats just kept coming and coming without pause.
They were all around me - to my left, right and above. THOUSANDS of them. It was incredible. A couple brushed my skin as they flew past, but none collided with me or the jagged walls of the cave despite moving at lightening speeds. A credit to their sonar. It was only with the camera that I was able to pick out sightings of individual bats thanks to the flash. The rest were just too fast as they blurred past me and out into the night. 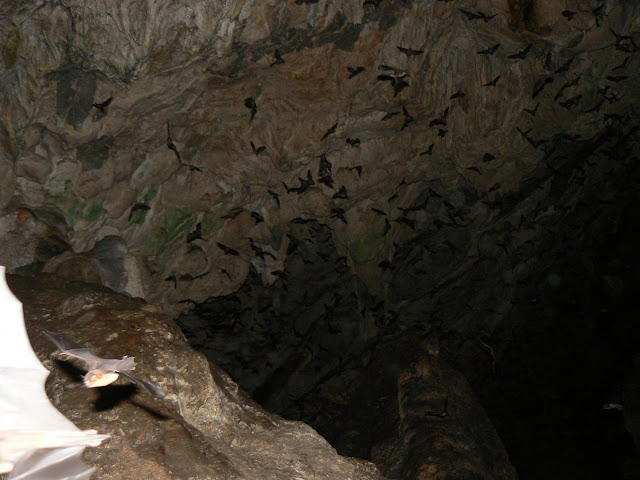