Cayos Cochinos will have to wait 'til next time I'm afraid. The thievin' gypsies wanted $35 each to bring us to the islands, more even if we wanted to come back a few days later. 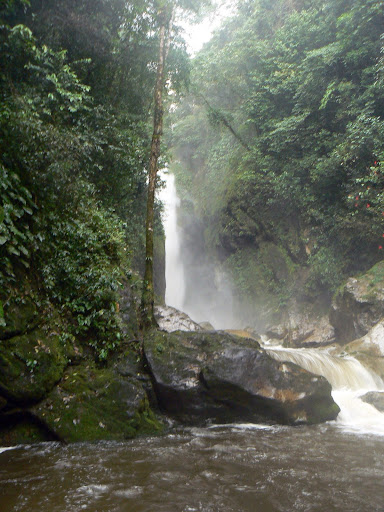 So instead we went to El Pino, and the natural park of Pico Bonito, in the hope of catching sight of a jaguar, poisonous snake or crocodile. Alas, however, the animals were a bit shy. Despite traipsing through the jungle for three hours or more, we had to make do with just beautiful scenery. Waterfalls and rapids, wooden bridges over ravines, and oodles of exotic trees.
Not one poisonous snake tried attack us, nor did any jaguars try eat us. I expected the park to be stuffed with snakes at least. We saw a couple of lizards and Jenny saw a toad (not me) and that was it.
In fact, there was more wildlife in the cabin we übernachted in that night. The cabin was in the middle of nowhere, thatched with palm leaves, had no electricity, and had holes covered by cloth for windows. Mosquito nets over the beds and candles helped create a peaceful, romantic setting. Outside, glowworms were lighting up to sparkle in the grass. It was truly beautiful to watch them.
We were just lying there relaxing and noting how peaceful it was when we heard a rustling in the roof above. Suddenly a long dark shadow burst in through the thatch. A looonnng shadow. All we could see, in the candlelight, was that it had a long long tail. 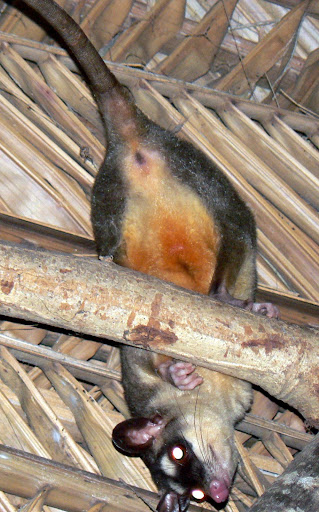 "What the fuck is that?!"
It kept snuffling around above our heads, apparently oblivious to our presence. Maybe it wasn't. Maybe it was planning its attack.
We shone a light at it, and discovered it was a big rat-like creature. He carried on with his snuffling. His eyes reflected the light in the darkness like some sort of hell-rat.
Still he continued with his snuffling. Only when I grabbed the camera (typical) did he appear to take notice. Apparently he didn't like the red auto focus light. He repeatedly showed us his arse, as if to tell us "Feck off! I live here!" I got a great picture of him mooning us, before he eventually bogged off.
The spell was broken though. The cabin was in the middle of nowhere, and apparently animals could just waltz in and out whenever the mood took them. All sorts of weird noises could be heard from outside. We hit the hay, but not two minutes after blowing out the candles, we heard more rustling, and then fluttering above our heads.
"Ciarán, there's a bat in the room."
Great. What the hell could I do? They've vampire bats in Honduras you know.
Thankfully he didn't hang around. Better pickings elsewhere I suppose.
Intermittent rusting in the roof thereafter though made sure it was a restless night.
Labels: Honduras jungle rats snakes