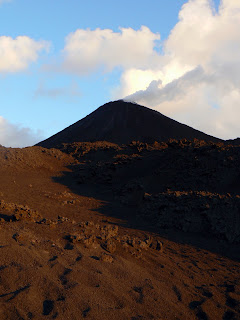 Molten rock flowed a few feet from my eyes as I balanced precariously on a rock above, and I survived! A river of lava literally streamed out of a hole near the top of Volcán de Pacaya, gurgling and bubbling with intense menace, as it made its devastating path down the side of the volcano.
Naturally, we had climbed the other side - that itself no small feet - as it took two hours' hiking to get to the natural spectacle. First a heart-pumping hike up, following by a much slower-paced hands and legs climb up the steepest hill I've ever climbed. And I've been to Frisco!
Black gravel and volcanic rock slid downhill as we attempted to make our way uphill, as if the volcano itself was warning us not to come any closer. Daylight was failing as if to heighten the suspense. Near the top, the temperature started rising, and then suddenly we noticed - red hot cinders under the rocks on which we were balanced. "Shit, there's fucking lava under these rocks!" It's what we had climbed to see, but it was a shock none the less.
Of course, the mind being what it is, we quickly wanted to see more lava. And we weren't disappointed. Flames burst out of a rock just a few feet away, and suddenly we didn't feel very safe. It was dark at this stage. I climbed on a high rock and was greeted by the sight of the lava river flowing downhill. Despite the danger I felt drawn closer. Must get a good picture! Closer and closer. Just a meter away. Take a picture Jenny! Stand there Jenny! 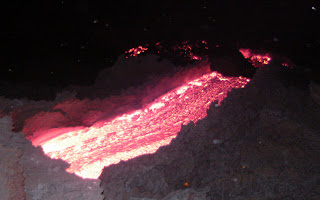 Then the heat got too much. Suddenly it was fucking unbearable. I thought the soles on my feet were melting. Then the rock on which I was standing started rocking. (Now I know why they're called rocks.) I beat a hasty retreat. At least as hasty as possible without falling onto more rocks below. Or worse. Molten rocks.
Quite a few tourists have been injured up here, and safety procedures were definitely not on menu. The so-called guides were calling us to begin our descent. "Barko, Barko!! Vamos! Vamos!"
Like closing time in Ireland however, we delayed the inevitable.
"Uno moment," we called back, as we savoured the experience as long as possible.
"Vamos!" they insisted, as flashlights could be seen disappearing in the darkness below us.
The lava, heat and general danger helped us relent however. But like any good Irishman (and a German girl) we were last to leave. 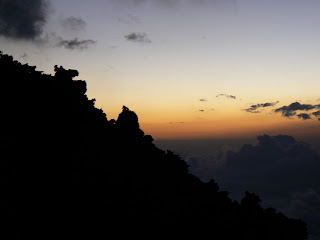