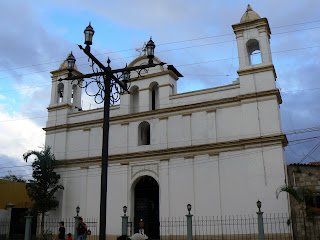 Grüße von Honduras!
After three days in Guatemala, it was time to move on, but we'll be back. Raúl, our ridiculously kind hostel owner in Antigua, told us not to travel anywhere on any kind of transport on either New Year's Eve or New Year's Day. It's just not safe.
Apparently the locals go bananas. They all get rip-roaringly drunk, jump into their cars and trucks, and drive around in a state of elation at the prospect of ending another shitty year. The prospect of everything being much better in the coming year helps them celebrate even more. A fresh beginning to be welcomed with open mouths. Hopefully they won't use their guns too.
"But it's always the same," laughed Raúl. "They think everything will be different but every year is the same as before. Nothing changes."
Raúl is very likable fellow. Nothing is a problem, and everything is done for the benefit and well-being of his guests. He got up before 4 a.m. this morning to see us off on our collectivo to Copán, Honduras.
The journey itself was no more eventful than I expected. I was expecting the driver to be a complete lunatic; he turned out to be a relatively sane lunatic. We only came near close contact with lorries twice - once only avoiding being rear-ended by a fast-approaching truck by a distance of less than a metre, and then later when the driver had to abort an overtaking manoeuvre mid-way due to an approaching brute of a machine. That truck seemed to speed up towards us once he realised there might be the possibility of a head on collision.
But we made it, and I'm sitting beside a cobbled street with all my limbs intact to write about the tale. 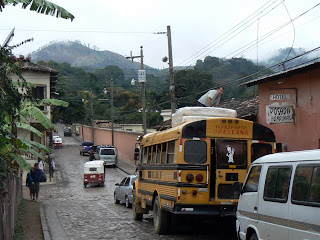 As you may noticed, there are no pictures to accompany my words. I never brought the connecting camera cable to enable such a wonder of science, but I will of course upload said pictures once I get back to the sanctuary of Berlin in February.
Thankfully that's a long way away now. A lot more adventures await. We'll spend three days here in Copán Ruinas, the site of some impressive Mayan ruins, before making our way to Bay Islands in the Caribbean. The Caribbean!