This is really only a Berlin update in that I have spent the majority of my time since the last update in Berlin, but I could just as well call it a San Francisco update, or a 12,000m above Earth update. 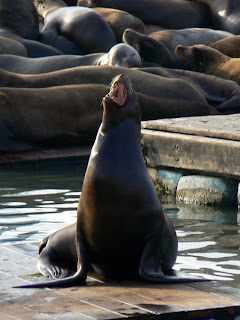 I just got back today but I'm not as happy as I should be to be honest.

The trouble started as soon as I arrived. After waiting yonks for the damn bus to arrive at the airport, and spending twice as many yonks wandering around Connolly Station before emerging at a platform from which trains have been known to depart, I finally boarded and settled into my seat and tried not to think about how long it would take back to Bray.
At the next stop however, as soon as I let my guard down, I was confronted by a PRICK who demanded I remove my luggage, (I was loaded with Christmas booty from the Vaterland), so he could sit down.
The expensively-suited fucker, probably around 60, chose to ignore the vacant seats around me and insisted that I remove and hold my luggage.
I took the largest rucksack off the seat and put it on the table in front of me, but he wanted a clear table.
"I'll have you put off the train," he informed me. "I don't care where you put it."
He then proceeded to push the rucksack from the table on top of me.
I resisted his efforts to push the damn thing, and told him I was entitled to have luggage, and that there were plenty of other seats in the carriage where he could read in acres of space.
I then noticed I had the support of some fellow passengers, who proceeded to argue with the dick on my behalf.
A rough-looking character piped up: "Herre, meester, he waz der befoar yeh."
A dodgier-looking fellow sitting behind me lied on my behalf, suggesting I had already attempted to place my luggage overhead without success on two occasions.
(I later heard him chatting with an equally disadvantaged looking pal of his. He was explaining how difficult it is to break the train seats. He underlined his point by repeatedly kicking the seat in front of him. (Mine, unfortunately). Thankfully, he was right. They are hard to break.)
Anyway, the bespectacled-fuckbag in front of me eventually settled down with my rucksack in front of him once he had enough room to do his crossword. Four letter word comes to mind.
I thanked my seat-destroying friends with a wink on the way off the train. The return wink made the ordeal worthwhile.
Just as I was about to depart the carriage, his royal fuckness called me back and offered his hand. "Happy Christmas," he offered. I accepted of course - probably because I had already told myself he would die a very bitter man.

Anyway, that's literally the latest update from my life. A fine welcome "home" that was. There is not one word of exaggeration.

Since the Theresas Mütter's famous victory a little over a month ago, quite a lot has happened. Unfortunately, this didn't include any further victories. (We lost the next match 9-0 - back to normal - although the snow, ice and minus temperatures were certainly a novelty - pictures available here: http://picasaweb.google.com/faheyc/SchneeFuBall#).

Thankfully, there's plenty of Glühwein in Berlin to help thaw a frozen Irishman, and a week in San Francisco also helped me survive until I reached under the clouds of this sodden island some people like to call home.
Literal and metaphorical clouds now seem to switch dominance at will. The latter I guess are here for the long-haul after the death of blind optimism, and the bursting of the bullshit bubble presided over by incompetents.
I'm in danger of ranting again. Must stop. Can't. Help. It. TheCountry'sFucked-ThereI'veSaidIt.

Away from the politics. Away, away. Back to the usual staple of sex, drugs, and techno. 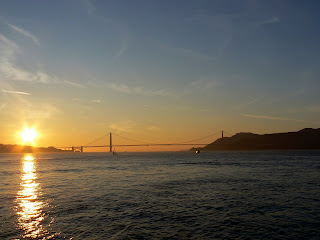 San Francisco seems to me to be an American version of Berlin. Both very liberal cities, where weirdness is pursued to see how far weirdness can go. Walking around Union Square with my gracious hosts, Fats (so named because he's not) and Tanya, we encountered an aging female hippie plastered in make-up with a face full of teeth, who was stroking her pet rat which was resting on a pillow. Quite a fancy pillow it was too. The unlikely couple had a sign requesting money for living expenses. Not necessarily just money either - this is America - they probably would have accepted Visa.
The weren't the only beggars on the streets. Another cheeky fucker had a sign declaring that he was collecting money for alcohol research, while another, who either stole the idea or had it stolen from him, declared his willingness for marijuana research. 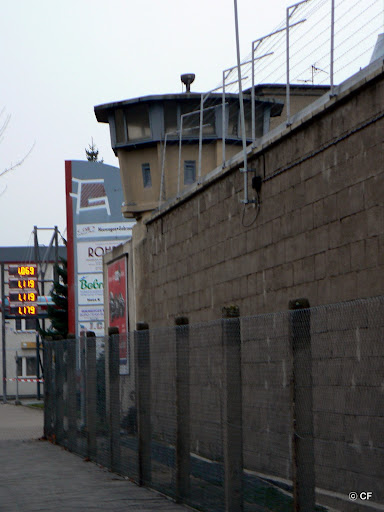 As a brief aside on a related/slightly askew matter - a bit like this update - I discovered at the weekend they are selling a marijuana-based drink in the cafeteria at the Stasi Prison in Berlin. Now that's ironic! Although mind-alteration is nothing new to the Stasi (East German Secret Police). Did you know more people worked for them than ever worked for the Gestapo? 91,000 employees and 300,000 informants apparently by the time the DDR collapsed in 1989.

My aunt, uncle and Helen, my cousin, visited the former prison last Friday, (Happy Birthday Helen!), when we had to escape a German-speaking tour guide to wander around on our own. Strictly forbidden. It must have been the first time anyone ever broke into the prison. We survived undetected for half an hour or so, ducking into cells, interrogation rooms, spies' writing rooms, and Stasi officers' quarters, before we were caught and "reprimanded". Luckily, we were caught by an English-speaking tour guide who allowed us to join her merry band to learn more about the dark side of East German history. Mad shit altogether. 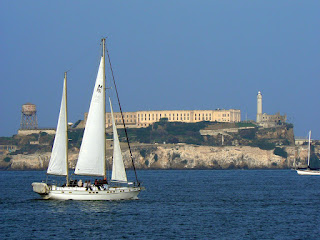 It was, as the San Franians would exclaim, "Off the freakin' hook, man!" Of course, they had their own version of hell behind bars in Alcatraz, although I have to say the East Germans would make "The Rock" look like Trabolgan Holiday Camp in Cork. 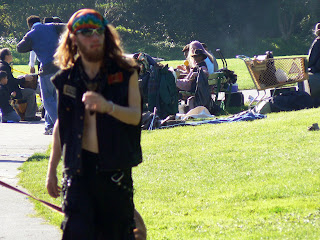 San Francisco's lack of people with flowers in their hair, sitting in the grass, strumming guitars and generally enjoying happiness was a bit of a disappointment for me. It seems the hippies are no more. Now there are just old washed-up bums, wasters and lazy fuckers who have no intention of working. Hmmm. I'll move swiftly on...

I did get to hold a gun for the first time. No, I didn't shoot anyone, despite the ever-lengthening list of potential targets. Apparently there's quite a lot of gun crime in SF, so to combat this, every household must have at least one gun. American logic, but I'd agree with it if they gave me a gun. I wonder if the same approach would work in the fight against prostitution or drugs. More prostitutes! More drugs!
Tanya's gun was very impressive. Heavy and black. (Like Oprah.) And I presume it shot bullets too. What more could a gun-toting fella ask for? 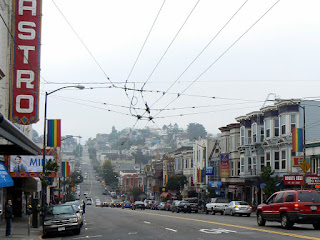 I've been accused by a good friend of mine of "having a gay old time. One homo bar after another". Apparently he's reading what he wants from my updates. This is Kaner, living in Sydney, the gayest city of the world. He's right about San Fran though - gaiety is definitely high on the agenda.
Hundreds of rainbow flags adorn the Castro, the city's outrageously gay district, soon to be made famous by the film Milk, which opened in the States while I was there. Sean Penn plays Harvey Milk, the first openly gay politician to be elected to public office in the US. It's actually an excellent film, and it gives a great insight into how minority groups can group together under strong leadership to fight for their rights.

I mentioned before that San Fran and Berlin are both liberal cities, although I get the feeling it's more controlled in the former. After all, the pubs actually close there. The madness seems more defined and structured there, whereas maybe Berlin hasn't reached that stage yet.

It was with horror that I read yesterday that there are proposals to ban public drinking in Mitte (where I live) due to the unruly behaviour of drunken teenagers. What next? The return of the Stasi?! There would be uproar if those proposals gained momentum, and I, for one, will march with beer in hand to protest this monstrous bastardisation of civil liberties.

Never mind Harvey Milk, equal rights and all that jazz, the powers that be will really know about civil rights if they mess with our beer!!!

Pictures from the San Francisco trip can be seen here: http://picasaweb.google.com/faheyc/SanFrancisco# 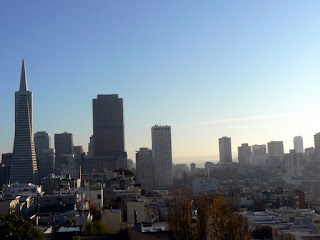 This will be my last update before I head for Central America on St. Stephen's Day. (Now officially just nine days away!) The plan is to meet Jenny in Guatemala that night (she's been there the last three weeks already), head towards the Pacific coast to surf and work on a turtle farm or something, then head up to Mexico for a gander at the sombrero-wearing feckers there, (I'll actually be a Steenking Grinngo!!), before coming back down through Mayan ruins in Guatemala, jungle lodges and stuff, and then heading for the cheapest diving on the Caribbean at Honduras.
I'll have to leave Wexford pretty much just after midnight Christmas Day to make sure I catch my flight on time from Dublin, so it'll be a dry Christmas Day for me!

I don't think I'll be writing long rambling emails like this while I'm away, (girly-length emails according to Fats), but if I find any beach or jungle-hut internet cafés, I'll jot down a few lines from Mesoamérica as I go on this blog: http://irishberliner.blogspot.com/

Yeah, yeah, I know, a Blog! Woohoo and all that. But it's what all the young people are doing now, and I sure as hell won't be joining Facebollox or anything like that 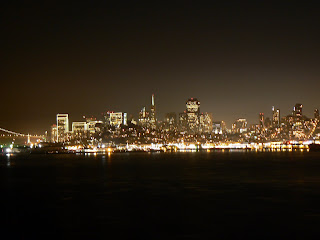