So it's 26 hours 43 minutes from Whitechurch, New Ross, Co. Wexford to Antigua, Guatemala. Not too bad considering the world of difference between the two. This place is amazing! 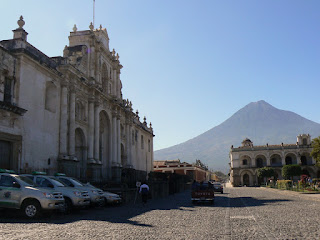 Antigua's an old colonial town, nestled precariously between volcanoes and their less-threatening mountain brethren. One particularly ominous volcano looms menacingly over the town. Last night it was sending plumes of smoke towards the stars.

The inhabitants take no notice beneath, bustling around day and night and doing their utmost to create as much noise as humanly possible. Old American school buses serve now as "chicken buses", so called because of the chickens in cages over passengers' heads, while the passengers themselves are forced to share a bench between at least three, sometimes more.
Between the honking of the horns, the Latino music pumping from cars/bars/shops, and the cries of "Guate, Guate, Guate!!!" announcing the destination from the buses (Guatemala City), there's an almighty din, not to mention the traffic of the cobbled streets, with tuk-tuks (motorbike taxis) nipping around at passengers' will, as well as the market women hawking their wares, and the general noise from inhabitants who want to be heard. As I type there's an oul' fella hanging out of the doorway, gesturing at me with his wizened hand held out, rasping "amigo, amigo..." I guess he's looking for money. Hopefully he'll go away. 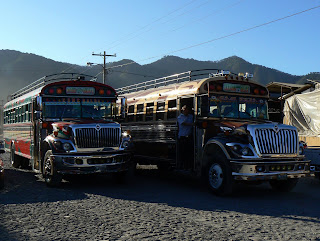 So far, despite the madness around me, the highlight has been the arrival in Guatemala City. Jenny was supposed to meet me at the airport, but after standing around at our pre-arranged meeting place, with no Jenny to be seen, I was thinking to myself "feckin typical, she survives a month without getting murdered, shot, attacked, or worse, she finally gets held up by banditos on her way to pick me up". After spending the previous month fearing the worst, I suppose it was apt that there would be another fright.
Finally, an hour late, she showed up. The relief! We embraced and all the worries of the previous month disappeared in an instant. Her collectivo to the airport took a scenic route, with a million unscheduled stops and drop-offs en route, but it didn't matter. Nothing mattered. I barely noticed the roses she gave me. We kissed and hugged and held each other and all was right with the world again. We huddled together all the way back to Antigua. Happy, happy, happy. The perfect way to start an an adventure.

In an hour or so we're going to Volcán de Pacaya, the active volcano, to climb to the top and see what all the fuss is about. There's a bit of a hike apparently, but that's not the main concern; nor is it the streams of lava which have to be negotiated once there; it's the bandits who have made a habit down through the years of holding up vulnerable gringos, robbing them, shooting them etc... Apparently, there's an armed guard to escort us. Once he's over 14 I'll be happy enough. 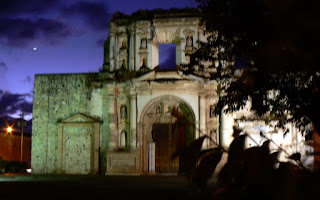