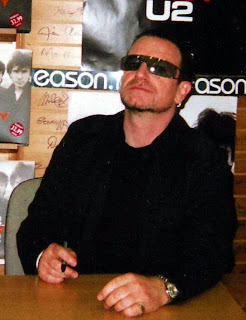 A dream became reality for this star-struck reporter when I finally met Larry, Adam, Bono and The Edge at Eason’s in Dublin last Saturday.
The lads were in the capital to sign copies of their book, U2 by U2, for 250 lucky punters who managed to gain access either through U2.com or by winning competitions on radio.
I myself claimed my precious wristband by telling Today FM what fruit played a prominent role in U2’s Popmart tour in 1997. (A giant 40-foot mirror-plated Lemon for those of you who don’t know – shame on you!)
I managed to drag myself away from work just long enough to text Lemon and my personal details off to cyberspace, and was astounded to actually hear Ray D’Arcy call my name out as one of the lucky winners just under an hour later. Jealous texts arrived shortly afterwards to confirm I had not been hearing things.
Hundreds of fans had already lined up outside Eason’s on Saturday morning to catch a glimpse of their heroes when I arrived about 9.45 a.m. (early for once). The band were not due to appear until noon, so there was plenty of time to get the book, grab a coffee, and then form an orderly queue.
Everyone had assumed their positions by 10.30 a.m. leaving plenty of time to thumb through books, make new friends, and exchange stories such as those only experienced by your average U2 fan.
Tension in the room gradually built up as the time dragged by. Doubts began to creep in. (Where are they? - Is this an elaborate hoax? - Shouldn’t they be here by now? - Do they know how tired my legs are? etc. etc.)
More time passed. Then, screams and camera flashes confirmed the moment was nearly upon us. Posing for the masses outside, the band acknowledged their fans before eventually making their way into Eason’s to be greeted by more cheers and camera flashes.
“Strike a pose Bono!” cried the fans, blatantly ignoring the no camera rule.
I, of course, remained calm and collected throughout this whole display, as I considered what witty remarks and clever anecdotes I would use to regale the lads when my turn to meet them came around. 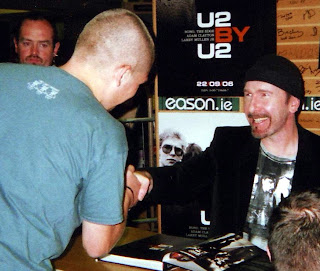 Edge was first up.
“Howya Edge,” I blurt, as all my stories deserted me and ran around the corner to cower.
“Hello there,” he replies, as he looks genuinely happy to meet me. (Maybe he recognised me from one of the five U2 concerts I attended last year, or the seven before that.)
Emboldened by his seeming friendliness, I tell him my name as I shake his hand.
“Is that Ciarán with a ‘C’ or a ‘K’? he asks, as he prepares to sign the book.
“With a ‘C’,” I reply, adding that it’s my birthday too.
“Ah, is it? Happy Birthday!” he says, as he proceeds to write birthday wishes into the book. 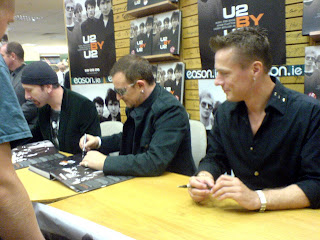 Bono, in the meantime, is evidently wondering who this devilishly handsome stranger is as he waits to meet me.
“It’s your birthday?!” he interjects. “And what have you got planned for the day?”
Telling him I’m off to the greyhound racing at Shelbourne Park to lose a fortune, (prophetic words, as it turned out), both Edge and Bono agree it was a good plan for the night.
“Ciarán goes to the dogs on his birthday,” Bono adds, as he writes same in the book. He draws a birthday cake, hands the book to Larry Mullen, and shakes my hand, allowing me a few vital seconds to think of something to say to the drummer fancied by most of the women I know.
“Your hands must be tired from signing all them autographs,” I suggest, knowing as I say it that I could have done better. 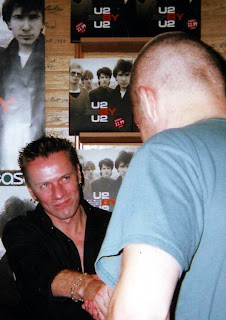 “No no, they’re fine,” Larry protests, leading me to suggest he might not feel the strain as much, because he uses his arms more than the others.
“Oh he’s always using his arms alright!” Bono interrupts again. “We’re always telling him that!” he laughs.
“No no, that’s not I meant!” I protest. But it’s too late. The damage is done. Larry sheepishly shakes my hand. “It’s great to meet you,” I tell him. “Great to meet you,” he replies.
I go to meet Adam Clayton who looks bemused by the whole situation, and I decide to retreat into politeness after the last experience.
“How are you? How’s life?” I ask.
“Erm, fine,” he replies. “It’s good.”
Adam compliments my t-shirt (featuring a teddy bear with giant luminous eyes and razor sharp teeth), and I tell him I have a million U2 t-shirts at home but thought they would like something else to look at for a change.
He seems touched by such a display of consideration, and nods his approval.
Deciding I’d better quit while I’m ahead, I quickly shake his hand, offer my heartfelt thanks, and retreat with my precious book.
On my way out an MTV crew stops to ask me about my experience. “Why are U2 the biggest band in the world?” the interviewer asks me.
A question the other bands would love to answer.
Labels: art Life Music U2